Just a day or two after I tracked down an archived copy of my old Pizza Hut Mitey Stuffed Crust review from 2015, Domino’s delivered me this slice of news in my news feed on Facebook and I knew I had to try it. Apparently, this collaboration was frequently requested by fans on Domino’s social media channels.

As an Australian, I’ve grown up on Vegemite on toast and especially with cheese. I don’t eat it too often as an adult, but when I do, there’s something very nostalgic about it that reminds me of simpler times.

What’s more impressive is that this time they actually had the naming rights to Vegemite on the product instead of alluding to it as Pizza Hut did. Nothing like a bit of co-branded junk food to really get me over the line.

Prelude: Journey to the Pizza

This couldn’t have happened at a worse time, we had just done some grocery shopping to get us over the line until our latest meal kit delivery arrived on Wednesday and had plenty of meals planned already. However, a strange twist of fate prevented me from going to the shops on my lunch break to get a few extra ingredients yesterday as I found I’d been to a COVID exposure site, so I had to stay home and order delivered pizza instead (then went to get tested after work).

I rarely ever order a single pizza from Domino’s or Pizza Hut as their deals and coupons are really the only way to get good value. But today I just wanted something small to tide me over until after my COVID test which was a two hour round trip.

Oddly, the Domino’s website experience was incredibly buggy and the pizza tracker didn’t work, they never sent me a photo of the pizza before it was delivered (I didn’t take a screenshot) and the delivery driver wasn’t the person pictured on the website unless they had a sex change (which I’m all for, but please just update your work photo for consistency). 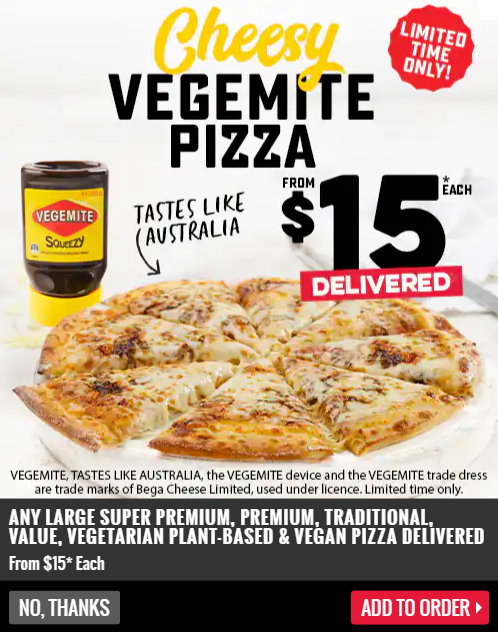 The discount code in their Google Ads was also expired so I just did this deal, which I think cost me twice as much as if I’d picked it up, but whatever. I’m here to write about pizza, not be a financial coach.

I ordered the absolute base, default version of the Cheesy Vegemite Pizza as it is advertised. No extra toppings or stuffed crust. It wouldn’t have been an honest review if I tainted it!

Whilst I recall that the big blob of Vegemite in the crust of Pizza Hut’s version being perhaps a little overpowering for people, I think the approach of having it mixed in with the cheese definitely spread the flavour out better and more consistently. So props to Domino’s Pizza on this. 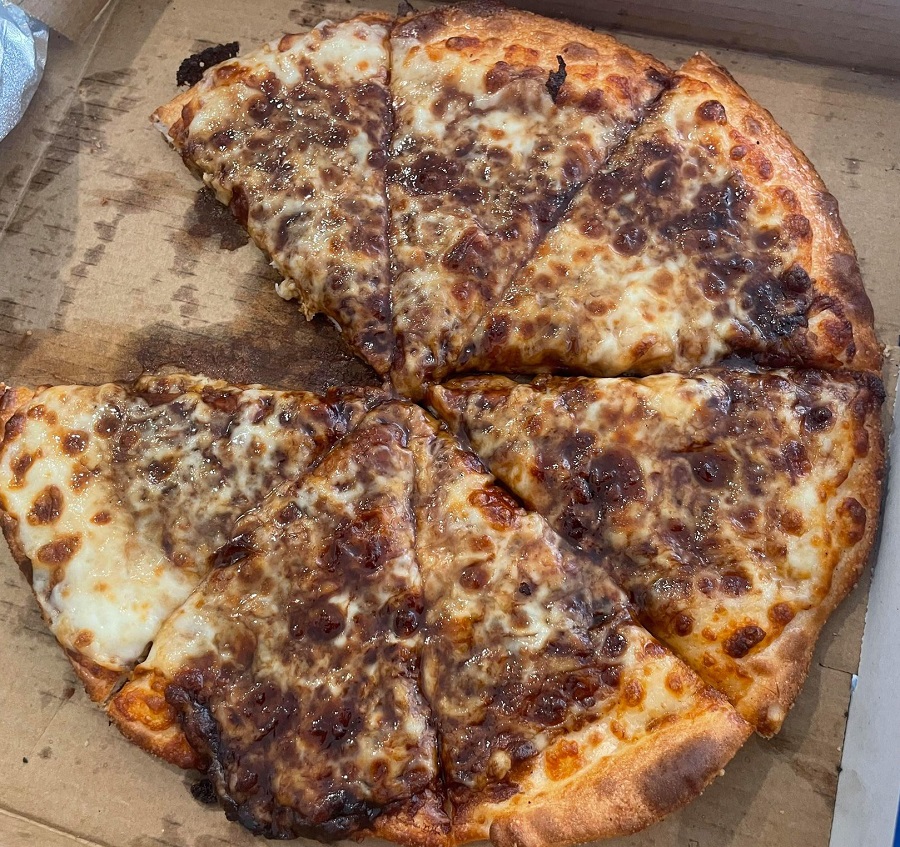 I feel like the Vegemite was still fairly generous on mine, with my pizza looking a lot darker than the one pictured in the promotional material. I can picture it being too strong for some people still, but for me it was perfect. My partner didn’t like it and didn’t eat a whole piece. But that’s her loss. I really enjoyed it. This might not be the best representation of what you will receive, but I’ve not seen any photos from other people yet.

I have a few small gripes in terms of price, the delivery deal is not very good value. It’s only $7.95 for this pizza if you pick it up which is great, and the delivery offer is $15 delivered in a deal that also covers more expensive pizzas. The best way to buy this is as an extra after already using a coupon on some other offer and then also picking it up yourself.

My other concern is that it’s far less filling than other pizzas. Yes, it’s cheaper than a lot of the meaty ones, but if you’re doing the deal I did, I’d rather pay $15 (inc delivery) for something more filling. That being said a lot of the pricing models used are confusing.

I just went back to both the Domino’s website and apps to check what I might have chosen to make my ultimate Vegemite pizza and it turns out, you cannot edit it much at all. I thought I was simply holding to my rules of fast-food-based journalistic integrity by ordering this thing stock-standard but you actually don’t get much choice to customise. This seemed pretty unusual, I thought Domino’s loved getting you to add extra toppings. 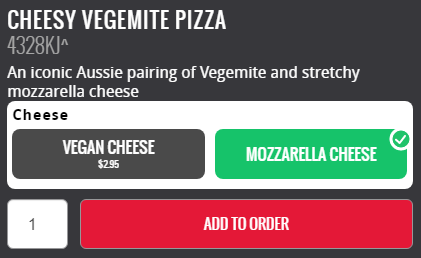 This part of the screen is where you would normally choose the dough-base such as XXXX and the sauce such as XXXX. But there are no options except for whether you want to use vegan cheese for an extra $2.95. So I couldn’t add my stuffed crust here even if I wanted to.

I also couldn’t add pepperoni to it (which would go well with it, I reckon). All I could do is remove these cheese, which would be barbaric.

I also tried adding Vegemite as a base and as an ingredient on other pizzas but it wasn’t available as an option.

I’m guessing that since this is co-branded by Vegemite, they must have a bit of control in how their product is represented and to avoid people ordering a disgusting combination and then either complaining online or perhaps demanding a refund.

I suppose there could be some business reasons behind it, such as royalties on each unit sold, which would be far easier to calculate as a percentage on a base unit price of $7.95 for all of these pizzas sold, rather than basing it on if the ingredient is used on another pizza or if it was removed from the Cheesy Vegemite Pizza. I’m not sure why you’d do that, but they sure made sure you can’t do it.
Does Vegemite Go on Pizza?
People put a lot of salty ingredients on their pizza. Olives, Anchovies and Pepperoni to name a few. I know that Vegemite is certainly not a typical pizza ingredient and Italians everywhere are probably horrified, but when you think about how similar pizza dough is to bread, and that cheese and Vegemite on toast is quite popular, it’s really not that different. In fact, I much prefer pizza dough to bread so for me, this is far superior to Vegemite on toast.

So yeah. This is pretty good and I’d eat it again. It even tasted good microwaved the next day. I wish I could customise it but I think I can see why you can’t and unlike the Pizza Hut “Mitey stuffed crust” which did not use the brand name itself. Most of the time you eat the stuffed crust separately to the toppings, so it was harder for someone to order a bad combination.

What Does WIR Stand For in House Plans?