After a 2.5 years of waiting for land to title and build to commence, we have finally moved into our newly built house by JG King Homes. However, some administrative errors resulted in us moving in up to 10 days later than we could have and 3 days later than we had organised to do so.

The ultimate failure in us moving in came from the confusion between the bank, broker and building admin who between them could not figure out that the final the invoice was for a different amount to the final stage of the loan, due to about $11,000 of variations which I needed to pay separately was lumped into the final invoice.

I knew I had to pay a variation but whenever I asked about the extra amount I needed to pay, the builder had no idea what I was talking about, as they didn’t know what my arrangement for with the bank was, and did not tell me that she didn’t know this.

We were under the impression that we would be moving on Friday the 8th of November, but the site manager gave me a call on Thursday to say that if the final payment can get cleared today, we could do settlement tomorrow. This was a surprise, but I was happy to try and make it happen.

I sent several emails trying to figure this out, including on October 31st which would have allowed me to move in on Friday 1st of November. 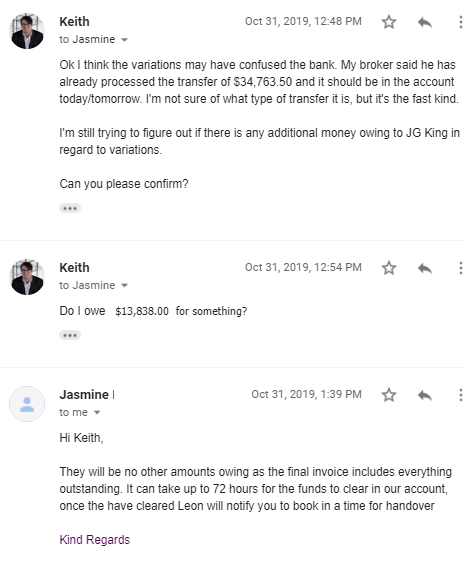 To add another layer to the confusion, my bank loan was set up by a different broker who left the company and I was passed on to a new guy. I don’t think he knew or had access to the final amount that the bank was obligated to pay, and by noting the difference in these figures he could have given me the amount I needed to pay.

The last bit of communication with the broker and builder was that the money had been sent by the bank but did not clear in time for us to arrange to move that day. We ended up missing out on the moving date of 1st of November, which was OK with us as this date was a surprise for us and we weren’t totally ready to move yet anyway.

We had just had our end of lease clean on Thursday and were packed and ready to move. The new tenants were also moving in this day in the evening and we had Kayla’s parents take the day off work to come and help move.

At 9AM I got a call from the site manager who told me that the money hadn’t come through and I was incredibly confused as I thought the money was sent last week. Somehow my broker and the builder had not bothered to tell me that the transfer never cleared until the day of handover.

After an hour of back and forth, we established that the bank would not transfer any amount until I had paid the other amount first and they wanted to get a new invoice created without the amount I owed on it, which the builder would not do for them, again slowing things down. The rest of my money was with a different bank.

The only solution was to get a bank cheque from my spending account’s bank and a bank cheque from the loan bank and to hand them both to the builder at the time of getting the keys. This sounded relatively easy and I thought everything would run smoothly.

Around 10PM I went and got the bank cheque for the remaining $11,000 variation from my spending bank and that went smoothly. I then waited for an hour or so whilst my broker was trying to get clearance from my loan bank. Eventually, he said it might be more effective if I go into a branch myself as well. So I went to my loan bank and once I was finally served, they said they would not give a bank cheque until there was a receipt for that. After half an hour or so of confusion on how this was possible, I asked if I delivered the cheque to the builder’s head office, would that solve the problem. They said yes.

At 2PM I had to send my partner to the JG King office in Port Melbourne to deliver the cheque so that they could write up a receipt for it. I had to send her as I was due to go and pick up the moving truck.

She did that I assumed the builder had scanned a copy of it to send to my broker to speed up the process, but they hadn’t, she had to pull over and take take a photo of it so I could send it on. I left the moving truck with my partner’s dad who filled it up with our stuff and headed back to my loan bank to get the second bank cheque.

I waited with a staff member until 4.45PM to get the bank cheque. At this time the broker called to say that they had done a bank transfer instead, which was annoying to me. It turns out that you cannot get a bank cheque without a spending account with the bank. As I only have a home loan with this bank, this was never possible. I then asked the lady at the bank why I had spent most of my day with her and had to drive the other bank cheque to the builder for a receipt if I was not able to get a bank cheque to begin with and she said that it’s not her job to give advice on that and can only do what the computer tells her to do.

I was really shocked to hear that the lady at the bank who I had been dealing with all day seemed to have known this wasn’t possible the whole time. Both the staff I had spoken to about getting the bank cheque there had asked to see my bank card and ID when I said why I was here and I told them both that I don’t have a bank card, only a loan and needed to get a bank cheque.

I then asked if I had created a proper bank account with them this morning, could I have done the bank cheque and they said yes. I asked why was this not suggested to me this morning if I had told you I am here for a bank cheque and we had established that I only have a home loan here. They said that it is not their job to make suggestions like that and they can only do what the computer tells them. They also mentioned that this never would have happened if I had gone to them directly and not through a broker.

So now we had to hope the money would clear Monday morning. By this point, the bank was closing and I had to make some phone calls. I had to get my partner and her dad to empty the moving truck. I also called the moving truck company and explained my situation. They said if I return it early in the morning tomorrow, they can give me a partial refund and then give me a discount on Monday.

Luckily we were able to store our belongings in the garage and spare rooms of the old rental property and stay in the spare room of my parents’ place for the weekend.

We got the call reasonably early on Monday that the money had gone through. We were able to get the keys from the builder, pick up the rental truck again (at a heavily discounted rate) and start moving everything from the garage at the old rental. My mum helped us and we got it all done. The rest of the day was a blur. The builder gifted us a chrome SMEG toaster, which was nice. We later discovered that someone had tried to break in over the weekend, breaking the rollers on one of the doors. This was later fixed by the builder.

We quickly found there were a few little issues with the house and we had no fences on the sides of our house, but we were happy to be finally in.