Whilst I’m a 33 man who mostly collects LEGO to expand on his Jurassic World layout, I’ve got to say, LEGO Friends has some very well designed sets. Whilst the colour palette isn’t really desirable to me, the designs, creative part usage and playability of these sets rarely fail to impress me.

About a week ago, my son was in the hospital for observation following a head injury and only one parent was allowed in. I had to find somewhere to kill some time nearby whilst I grabbed some supplies for my partner and son for when I was allowed to go and see them.  This time dragged on so I started looking at LEGO sets in the stores beyond my typical boyish sets and saw this – LEGO 41701 Friends Street Food Market. This set was very impressive for its discounted price of $59 AUD. It featured a lot of parts I could easily repurpose into my Jurassic World Build.

You see, when building a theme park, you need lots of food places and these are all pretty great. The bright colour scheme that is typically associated with LEGO Friends actually works well here. Being a LEGO-owned property, it’s also good value for money compared to the LEGO Marvel, Star Wars, Disney, DC, Jurassic World sets. This set came with 3 Friends mini-dolls, 2 food stands, a food truck, a park bench and a few other little accessories, as well as 2 faces per character and lots of little printed and moulded food pieces and stickered pieces that could easily be adapted into your LEGO Jurassic World or LEGO City build.

Given that I bought this set to modify and mix with regular LEGO, I’m not going to talk about the characters or display them in further photos. They all have two different heads, which is pretty neat. 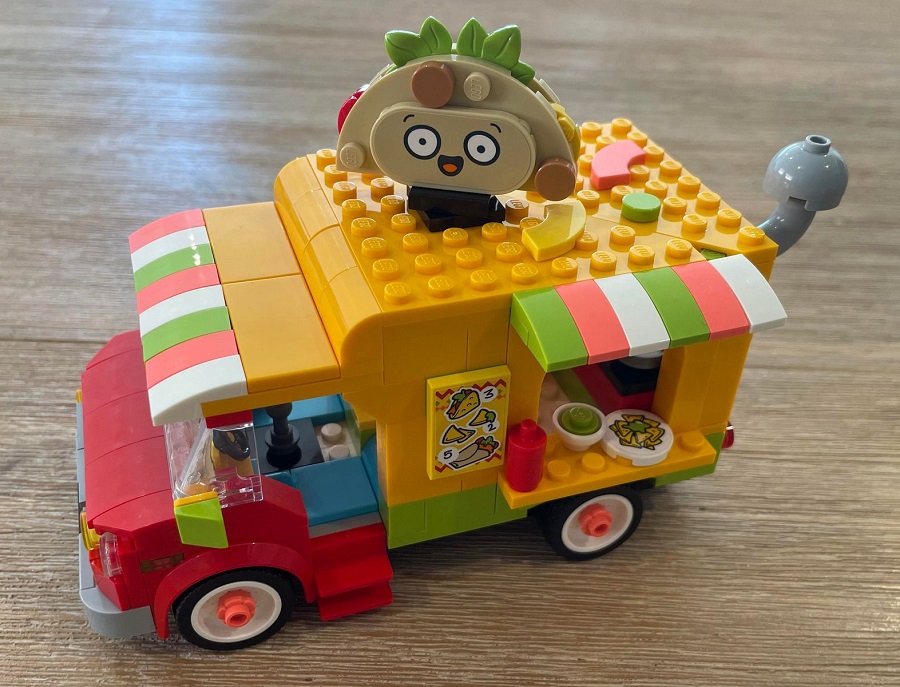 This is probably the main feature ot the set. It’s quite large and impressive, with room in the cab for two figures and room in the back for a chef. I love the cartoon taco on the roof. Its face is a sticker, which is always unfortunate, but it does look very cute. I don’t like the other decorations on the roof, they look very random. I like the exhaust port at the back, it comes out above the stovetop. There is also a menu sticker on the side and a nachos sticker and a little bowl with a green stud representing guacamole. There sauce bottle is probably for hot sauce, rather than ketchup. 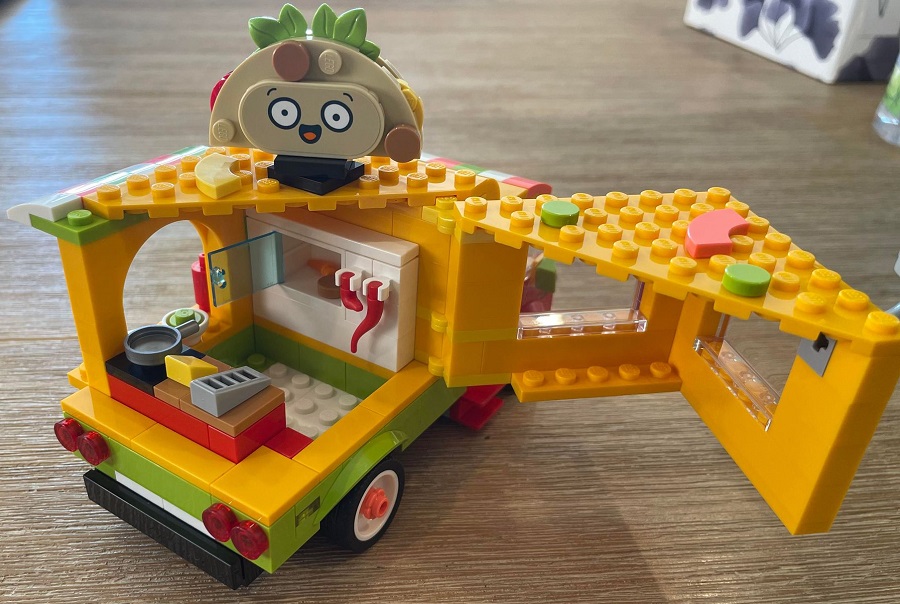 I actually really like the way the taco truck opens up. The interior is very detailed with a microwave with food in it, some little horn pieces in red that represent chillis. I love the representation of the cheese and cheese grater on the counter as well. Very creative. My plan for this set is to remove the truck elements and turn them into a standalone permanent structure to better match the other parts of this set. This will better suit my Jurassic World. 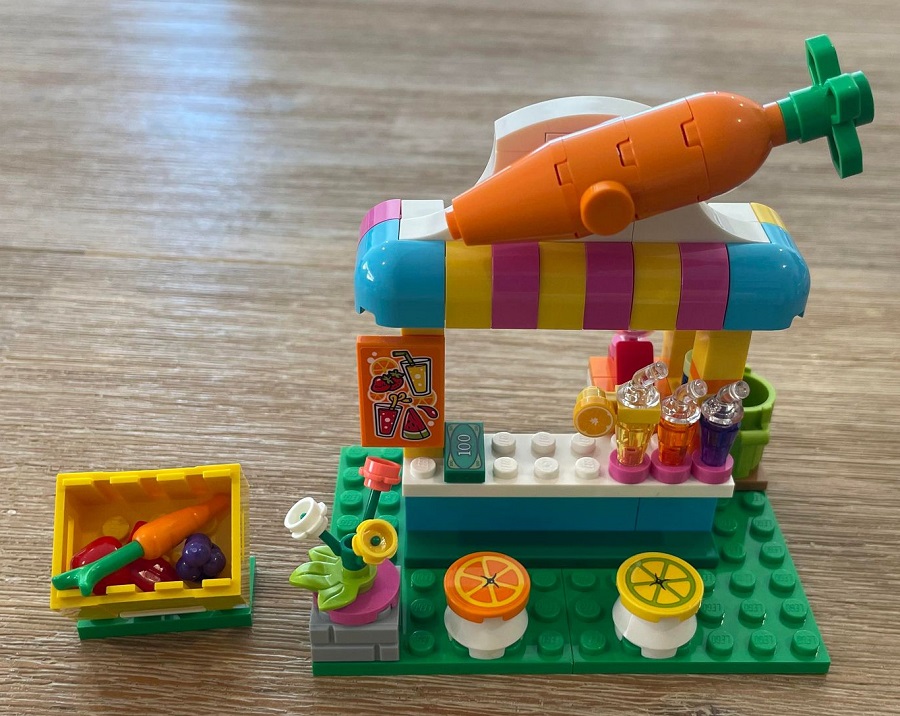 LEGO seems to really like juice stands, I think they are making a conscious effort to promote healthy eating and drinking. I really like this build as well, it is very creative with the giant carrot on the roof, the little juice cups are made using a creative selection of parts, and the little fruit stickers are very cute. 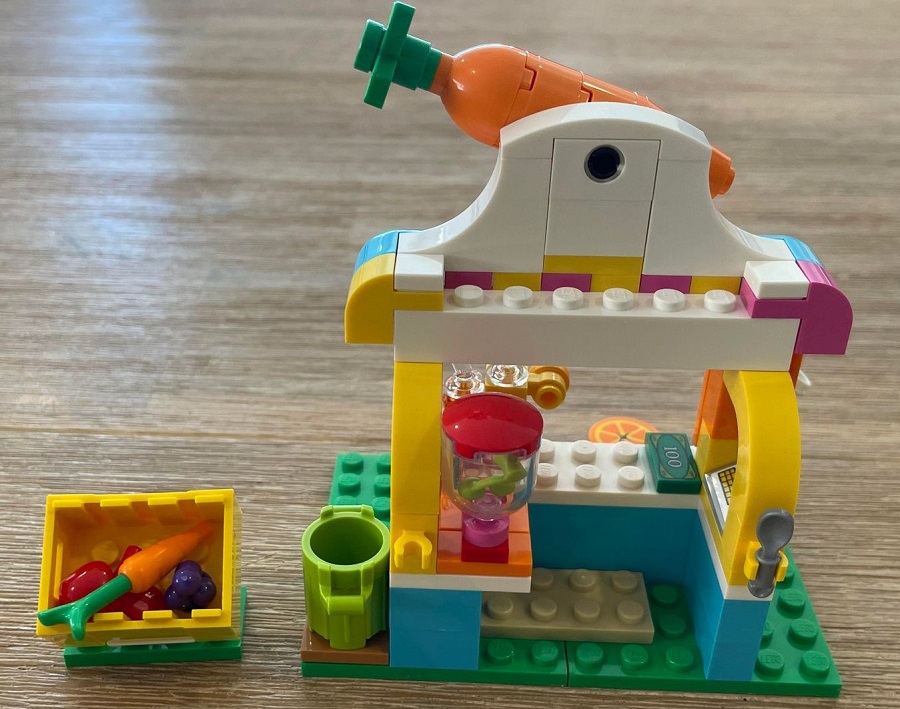 The blender here is pretty neat with some fruit in there. The green waste bin is meant to have a banana in it but I forgot to put it there. I like that there are holders on the back for spoons and other accessories so that you don’t lose them. 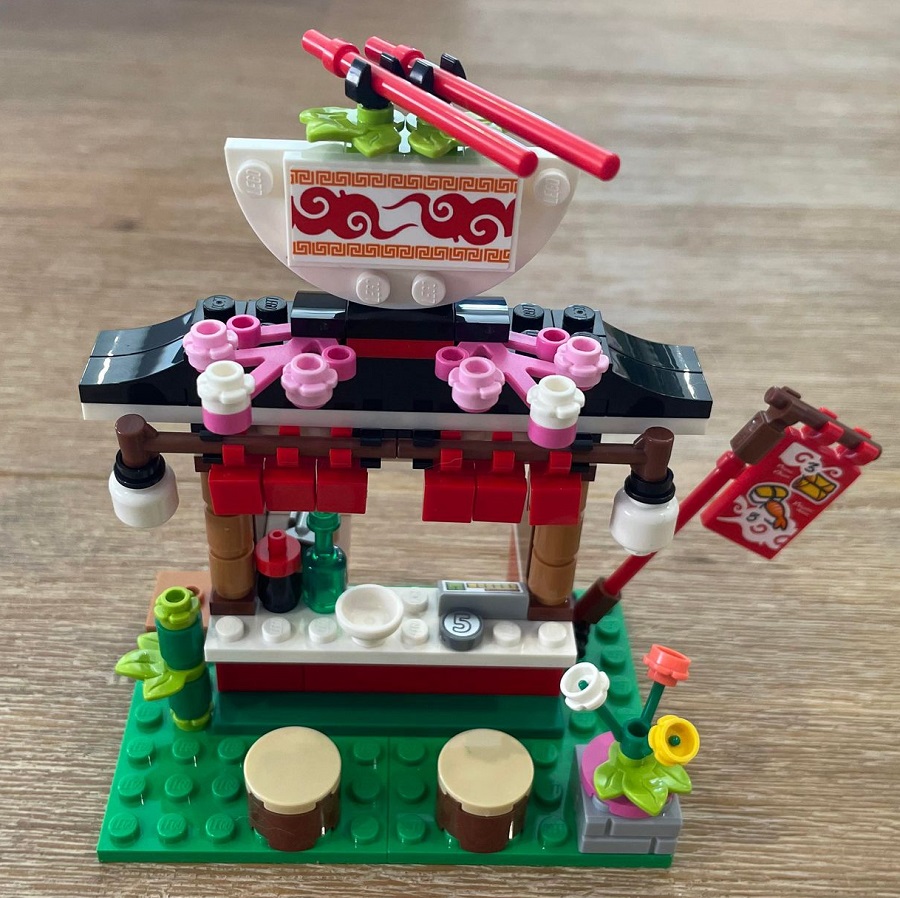 To me, this the LEGO Sushi Stand in this set was one of the stand out features. This will need very little modification to suit the LEGO City or Lego Jurassic World builds. I love the use of red and the pink cherry blossoms are not out of place, whilst still adding a bit of the signature pastels seen in LEGO Friends. The giant chopsticks on the roof are clever and I love the little soy sauce bottle and vinegar. The white LEGO Minifigure heads as paper lanterns is also very clever. 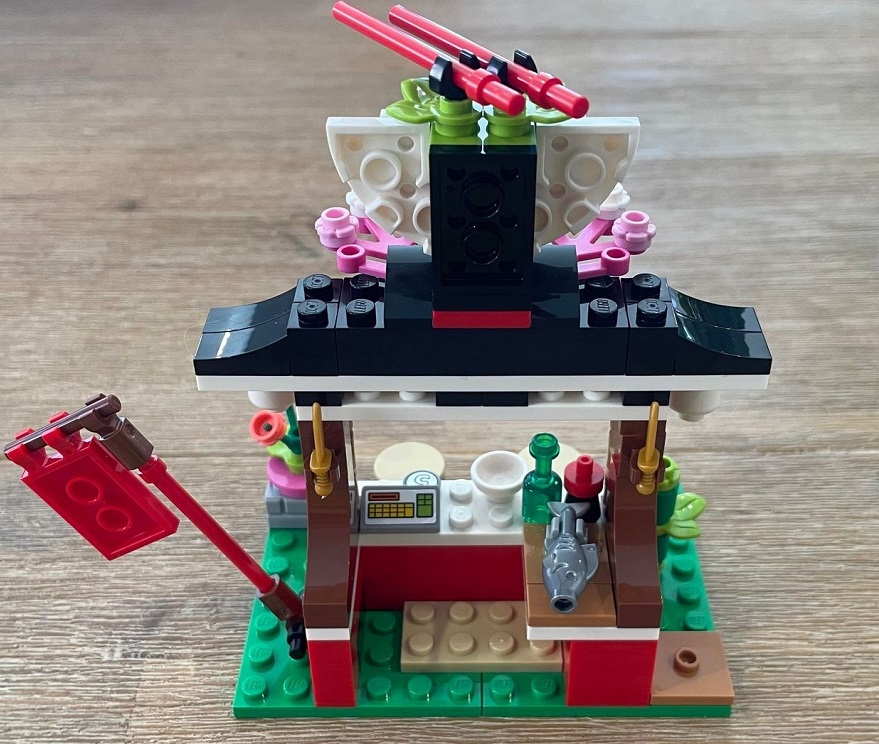 The inside is quite basic, with a chopping board with a fish on it, which makes a lot of sense when you’re making sushi and sashimi, There are little gold knives as decorations at the back. They might be for cooking, or just decorative. 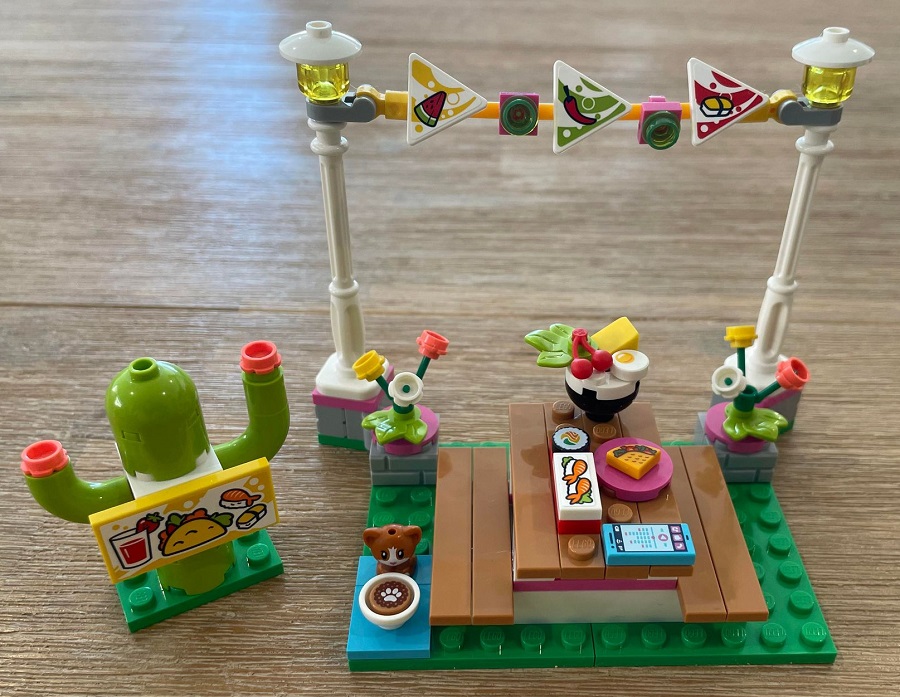 Here are the other decorations, a little cactus sign representing the juice, Mexican and Japanese stands. The banner above the park bench also promotes these 3 stands. The seating area has smooth plates for sitting on, as these Friends mini-dolls do not sit on studs the way a typical Minifigure does. There are some studs on the table itself too hold the food items which are all very nicely detailed. This includes some sashimi, a ramen bowl and what is probably a quesadilla. There’s also a mobile phone on the table and some flower decorations. There’s a little cat or dog pet and some food for it as well.

For me, I will likely use the cactus and the signage for my Jurassic World food court area, I think i can recycle some of the bench parts to make a smaller bench. This would be too big for Minifigures. 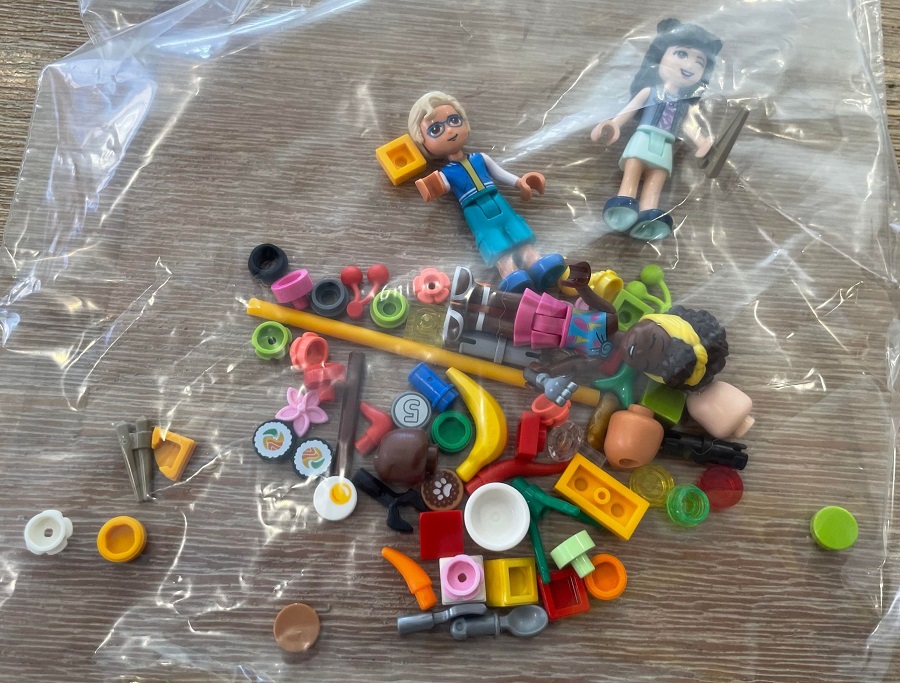 Here’s my bag of extra parts from this set, as well as the mini-dolls. There are lots of extra food pieces here including the little egg and sushi printed tiles, cuttlerly and flower pieces. You can’t see the alternate faces here, but they are nice. I like that the guy, Sebastian has a face of him eating spicy food. You can also see the banana from the smoothie place’s bin here. I quite like the chopsticks and will be sure to incorporate many of these food pieces into my Jurassic World build.

Overall, I think this is a great set for fans of LEGO Friends and beyond. If you’re a LEGO Friends fan, I can see this being a lot of fun to add your other Friends characters to as you’ll want more people to work at the stands and to act as customers.