Photos of my childhood bedroom in 2003

I’ve always been quite a nostalgic person. I moved house for the first time in 2003 when I was 15  and took a few photos of my childhood bedroom. I recently found and scanned 3 photos of this room. Here I’ll list all the items I can see in each photo. 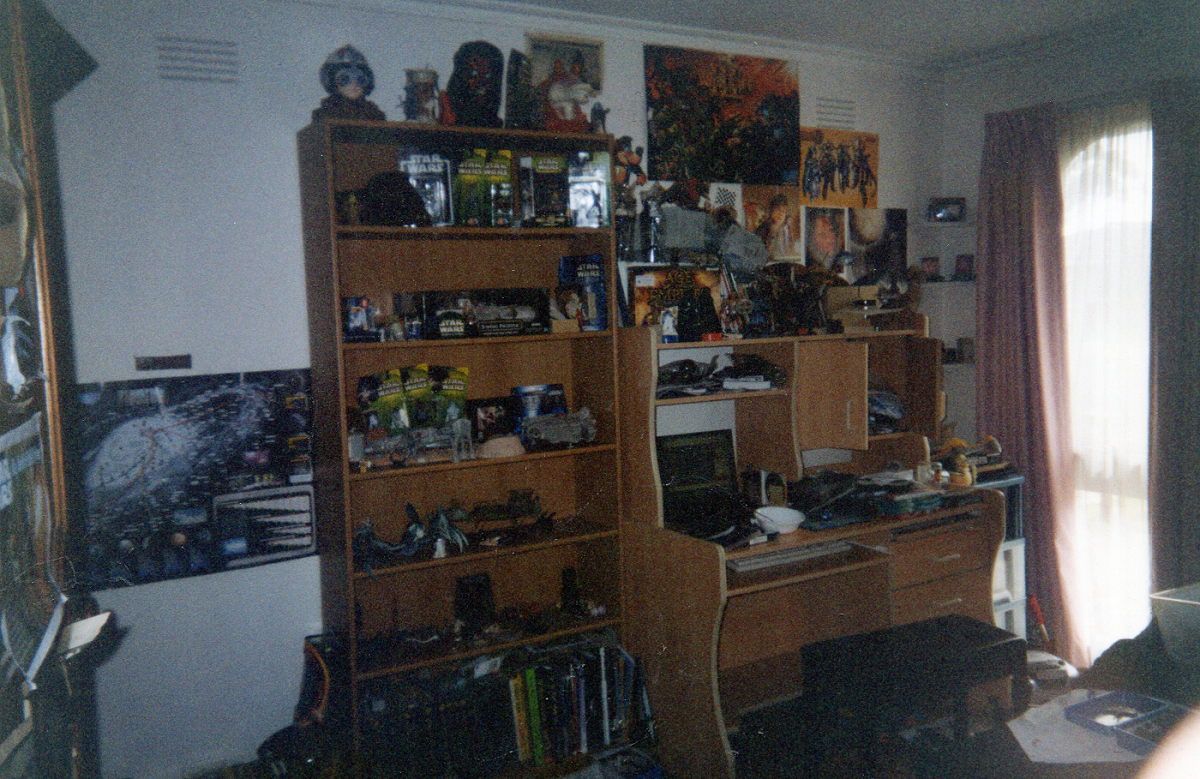 On the far left you cane my wardrobe doors. This was covered in news articles and pictures from magazines and newspapers for Star Wars articles. I think one of the pieces visible in this photo was photocopied from an old Disney Adventures magazines.

The poster to the left of the bookcase was a Star Wars universe map. I below it is a Lord of the Rings orc figure still in its package. I’ve actually listed that on eBay recently.

On top of the bookshelf includes 3 Star Wars Episode 1 money box heads – Anakin Skywalker, Darth Maul and Jar Jar Binks. I think I got these on clearance several years earlier. There are also a few Star Wars 3.75 inch figures including Luke Skywalker in the Bacta tank, which was a hilarious playset, featuring luke floating in his underwear. The top right corner of the shelf has a figure of Orn Free Taa, a senator from Attack of the Clones. There’s another toy in its packaging up there but I can’t see it. On the wall behind these is a newspaper cut out which was a political cartoon that I believe had Prime Minister John Howard on it as young Anakin Skywalker from Star Wars Episode 1 with his shadow looking like Darth Vader’s silhouette with the letters “GST” appearing within the shadow.

The second shelf has the empty box for a Star Wars lego set with an escape pod with R2D2 and C3PO which can be seen assembled on the third shelf. There are a few loose astromech droids, a new in box Star Wars Power of the Force Y Wing Fighter, an Aurra Sing figure and a new in box Star Wars Micromachines Action Fleet set from Episode 1.

The fourth shelf includes 3.75 inch scale Star Wars Acklay monster from Star Wars Episode 2 and Skiff vehicle from Return of the Jedi. I can’t really tell what the other objects are, probably Star Wars figures.

The fifth shelf has some Lord of the Rings stuff on it, I can see stands and accessories that came with the figures for the 2001 Peter Jackson Fellowship of the Ring film.

The bottom shelf has a large collection of Indian comic books, my Tazo collection and books about Star Wars and Lord of the Rings.

There is a large WarCraft 3 poster. This may have come with the original big box game or perhaps it came in the press kit sent to us to review the game for PC Update magazine. There’s also a Banjo Kazooie or Banjo Tooie poster, Mario Kart poster and Golden Sun poster, each would come with a Nintendo magazine of some sort. There are two Star Wars posters that were once part of a calendar, the Lord of the Rings Aragorn poster was from a Lord of the Rings calendar from Video Ezy.

At the top of the desk here are some Star Wars Episode drink bottles, possibly from Hungry Jacks and the body of a large AT-AT toy. These rest above my “How My Body Works” book collection which are followed by my small collection of novels including some Ian Fleming James Bond books that I never read, some Star Wars, Lord of the Rings novels etc. These cannot really be seen. In front of the books is my big box collection of the original Age of Empires games.  In front of that are some Star Wars jar lid figurines, which originally housed lollies. There is then a 2000s series He-Man and Skeletor figure from the modern Masters of the Universe cartoon. There is also a lamp and a Jawa on a Ronto figure from Star Wars. The rest of the desk is a big mess and I can’t really tell what’s on there except my Laptop etc. I used to use this to stay up late on MSN talking to school friends. In front of the desk is a piano stool and the foot of my bed.

To the Right of the Desk

In the corner of the room, there are some corner shelves. On the top one is an old-timey Matchbox Car. The second has some Pokemon Burger King toys. The third shelf has some small containers and tiny books. Below this is a large blue set of drawers on wheels which contain all my Star Wars figures. Above this is a Naboo Starfighter and a Jabba the Hutt toy, both in the 3.75-inch scale and from Star Wars Episode 1. Beside these drawers you can see a red fold up scooter and a CD player. On the foot of my bed you can see the missing drawer and a blue lunchbox from Sea World which may have Star Wars Pod Racers Micromachines in it. You can also see my hideous pink curtains, which were found throughout the house. This window faced the front of the house and you could see the street from there. 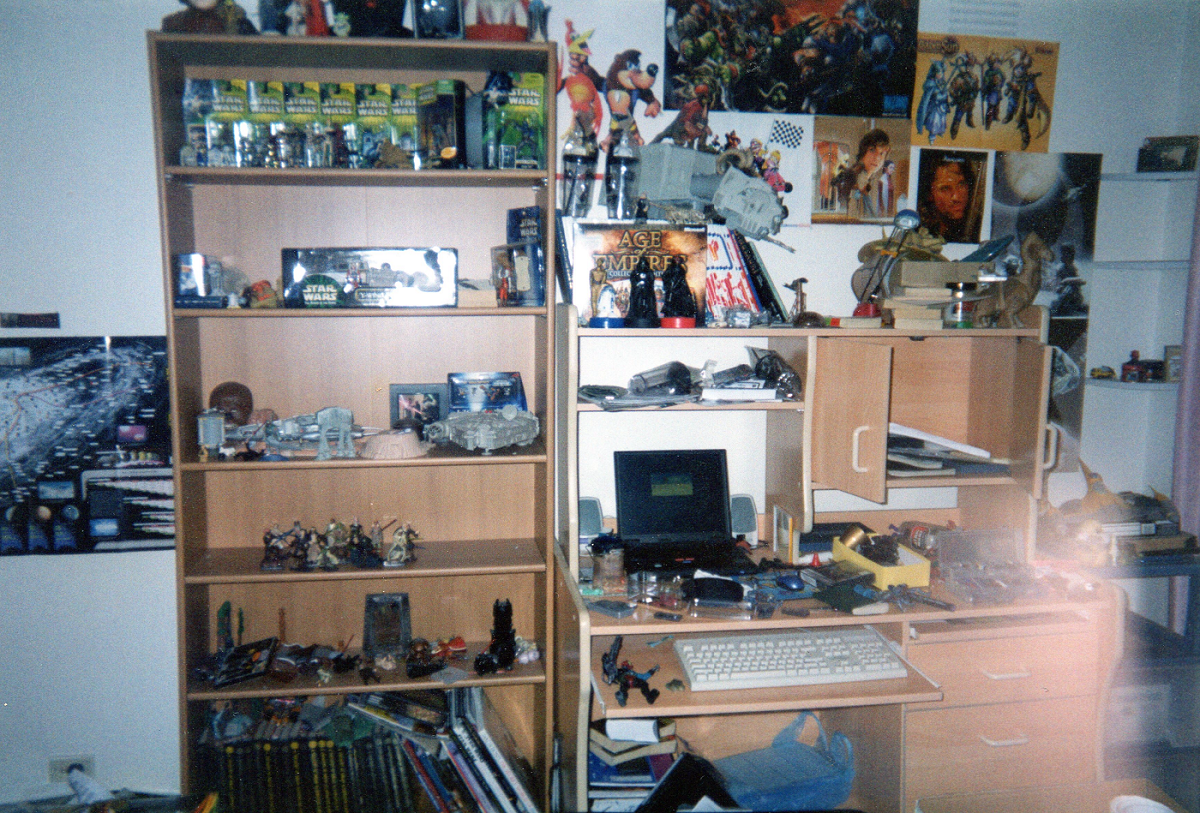 This second photo shows things a little clearer but things have been moved around. The bookshelf is organised a bit better with all of the sealed 3.75 Star Wars figures on the top shelf. The fourth shelf has all my Star Wars Episode 1 and 2 Jedi, trying to replicate the arena battle. On the desk you can see my tiny BenQ computer mouse on a Pokemon mouse pad that I still use today. There’s also a Whitman’s Sampler box with some toys in it and a Trapjaw figure from the 2000s series of Masters of the Universe. 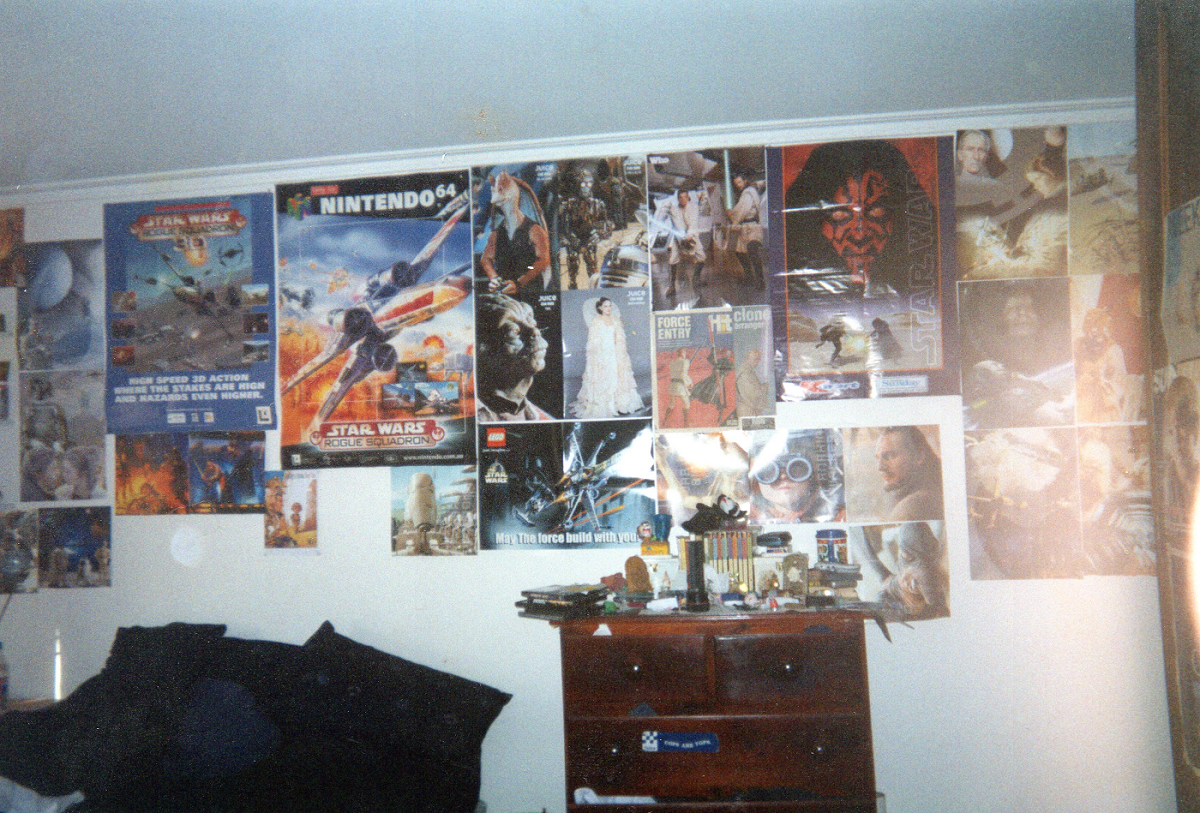 Here is the other side of the room. You can see mostly Star Wars posters. The smaller ones are all from Calendars and some of the larger ones are from magazines such as Who. There are two posters for Star Wars Rogue Squadron on PC and Nintendo 64. The N64 poster has remained up in my homes ever since, even today in my games room. I got these from my cousin in Queensland who we visited once, she worked at a video game shop at the time. The big Darth Maul poster was a Star Wars Episode 1 Kmart catalogue on the other side and came in the Sunday Herald Sun. There is a Mad Magazine photocopy parody poster and a Lego Star Wars poster as well.

The chest of drawers has a Taz candy dispenser, a collection of Enid Blyton’s Famous Five books which my dad had bought me but I never read. Some collection boxes of little Peter Rabbit books,a torch, a cassette walkman, a drink bottle from Disney’s Coronado Springs Resort and Darth Vader parody doll from the Big Dog store in America. There’s a few little statues of Indian gods as well such as Ganesh/Gunpati and Hanuman. The sticker on the drawers says “Cops are tops” on it. At the very right of the image you can see some of the newspaper lift outs stuck to my wardrobe. The door was also to the right. To the left is another window and a bedside table.

I honestly have no idea who would ever be interested in looking at my childhood bedroom, but I do find these pics to be a fun time-capsule of the late 90s and early 2000s.

Why buying House and & Land is perfect for First Home Buyers