Today is my first day of “leave without pay” as my work has cut down our hours due to the Covid-19 lockdown in Victoria. I’ve been avoiding Pacific Werribee (or The Werribee Plaza to many) for about a month now but chose to shop there around lunchtime as I heard I’d have better luck finding toilet paper there. Being a weekday, it seemed like a good opportunity to go whilst it would be at its quietest and I did manage to buy what I needed.

Pacific Werribee was incredibly quiet. I took some photos whilst I was there but because I was on a bit of mission, I only went to one half the shopping centre. So I didn’t see everything but I was quite amazed at how many shops were actually closed and a bit surprised by some of the ones that were still open.

Whilst many of these photos are bleak and grim, it will be interesting to look back on these in the future. 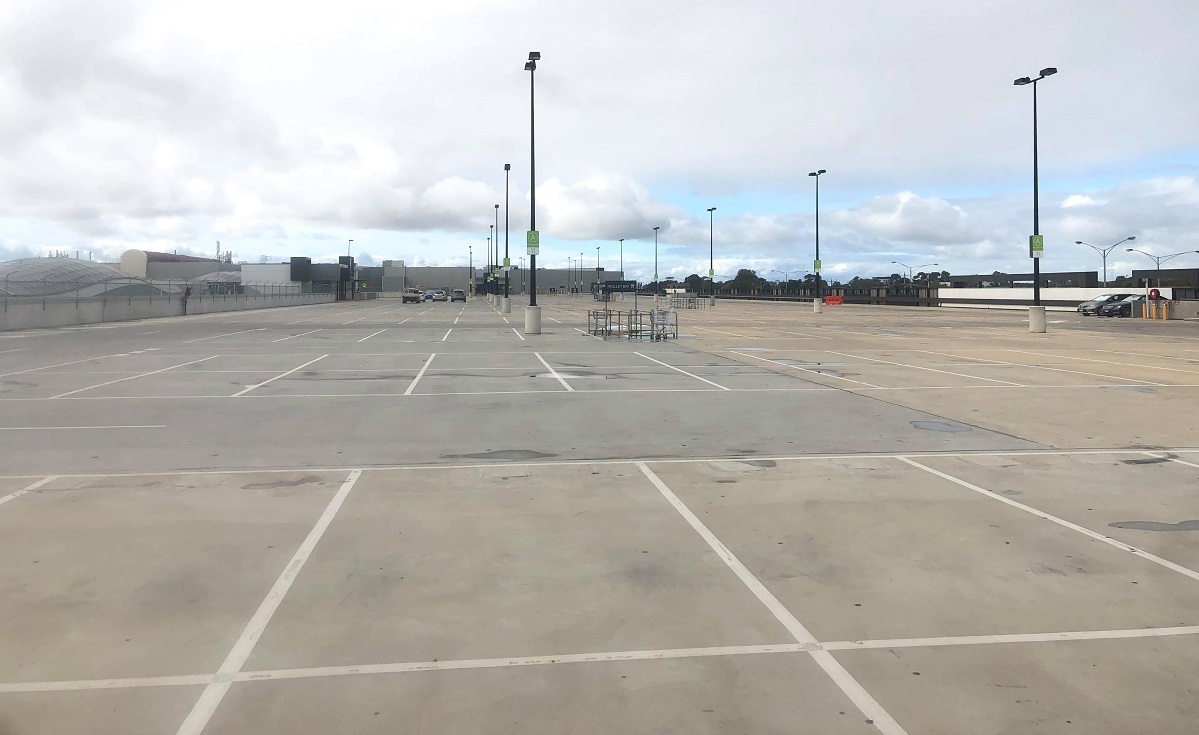 Here’s my favourite part of Pacific Werribee to park, the top floor. There were very few cars parked up there today. Very rare to see the car park so empty during daylight hours.

When entering, and at other points, throughout the complex, there were these signs on the floor to remind you to keep 2 metres away from other shoppers. I think they’ve done a decent job of reminding everyone to keep a safe distance apart. 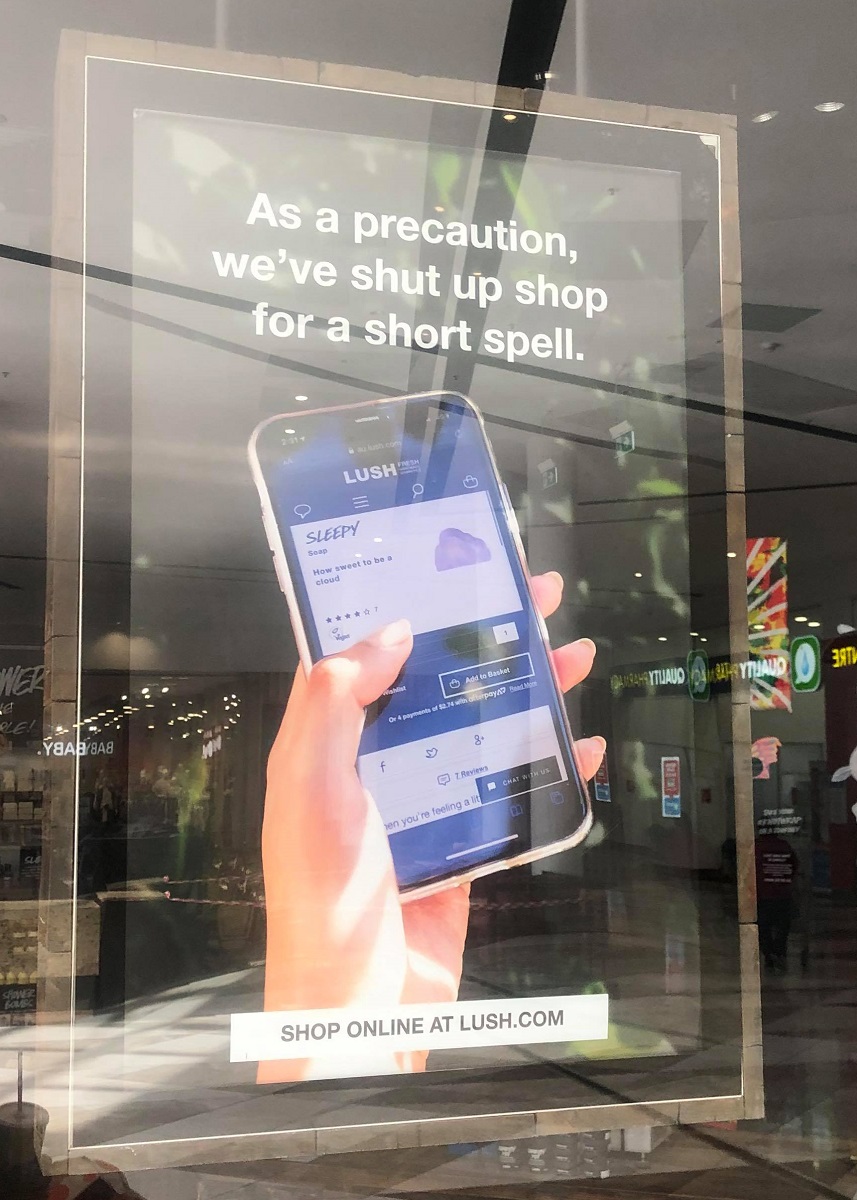 Upon entering you notice that almost all the smaller stores have signs up like this telling you that they are closed, but you can still shop online. Here’s a sign for Lush, which is one of the first stores I usually see when I enter from the car park. 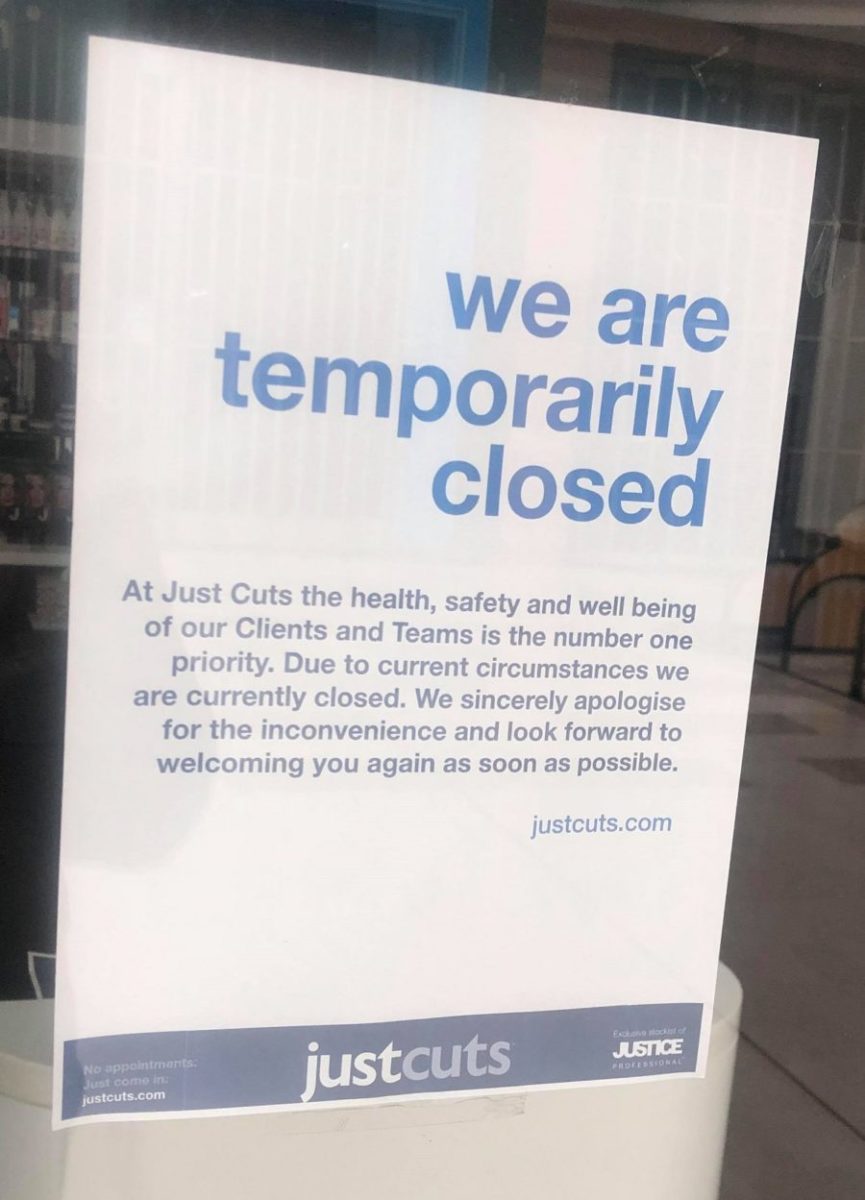 I knew all the tanning, nail salon and other beauty services would be shut, but I was surprised to see hairdressers such as Just Cuts and Grindstone closed. There was a period when the government was allowing hairdressers to remain open, but I certainly agree that everyone can go a few weeks or months without a haircut. 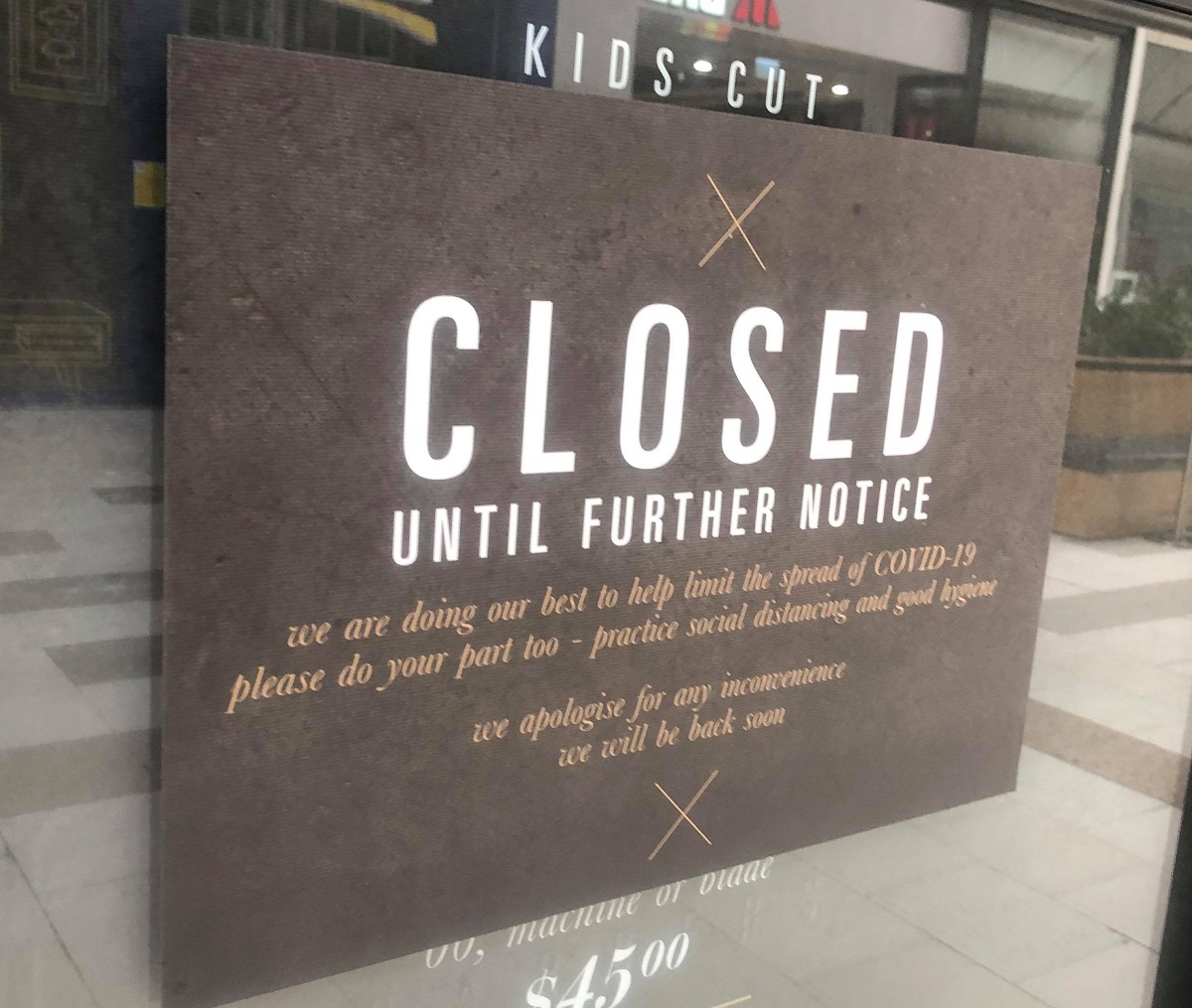 Shoutout to Grindstone hairdressers at Pacific Werribee, they have given me many good haircuts and beard trims over the years. They also give you a free beer if it’s after 12pm. 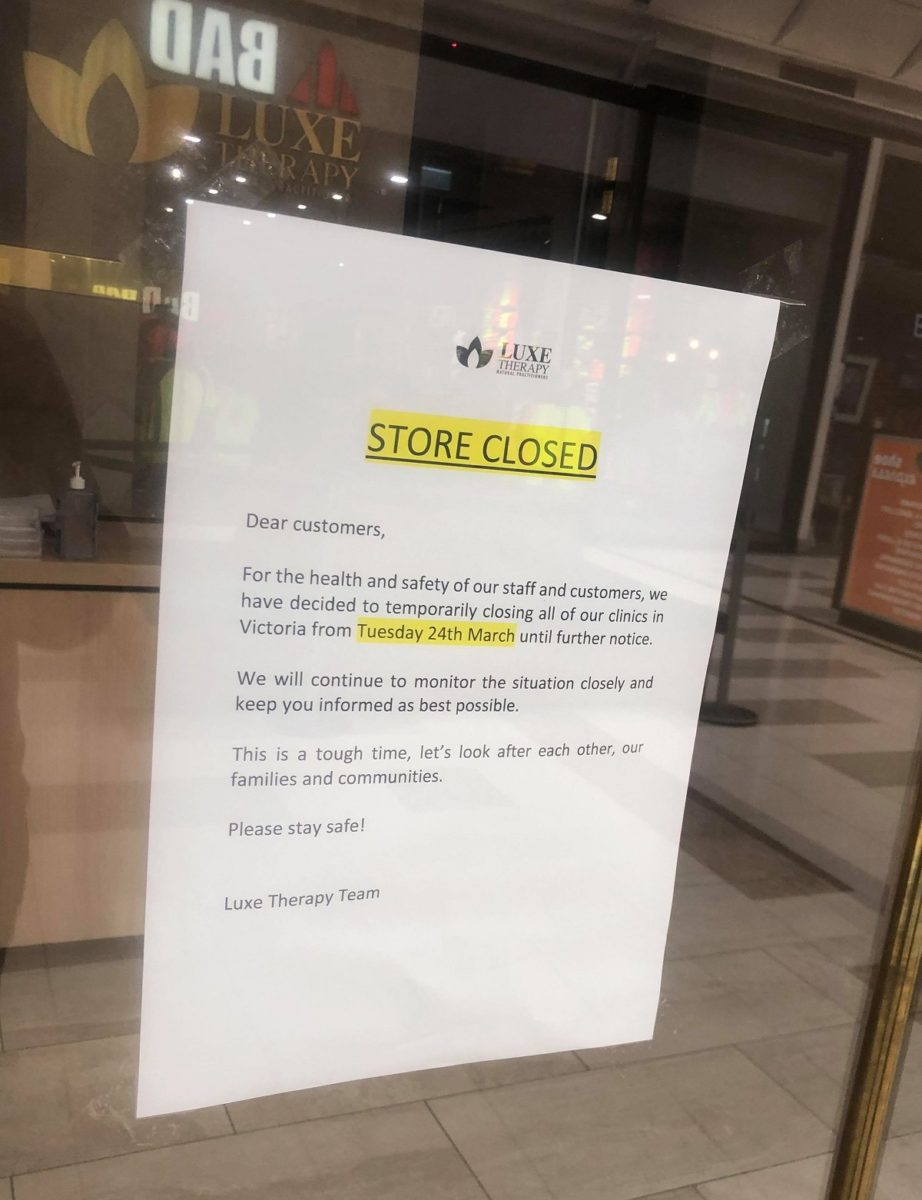 All places that remained open had lines on the ground to ensure people kept their distance from staff, such as at the concierge desk. 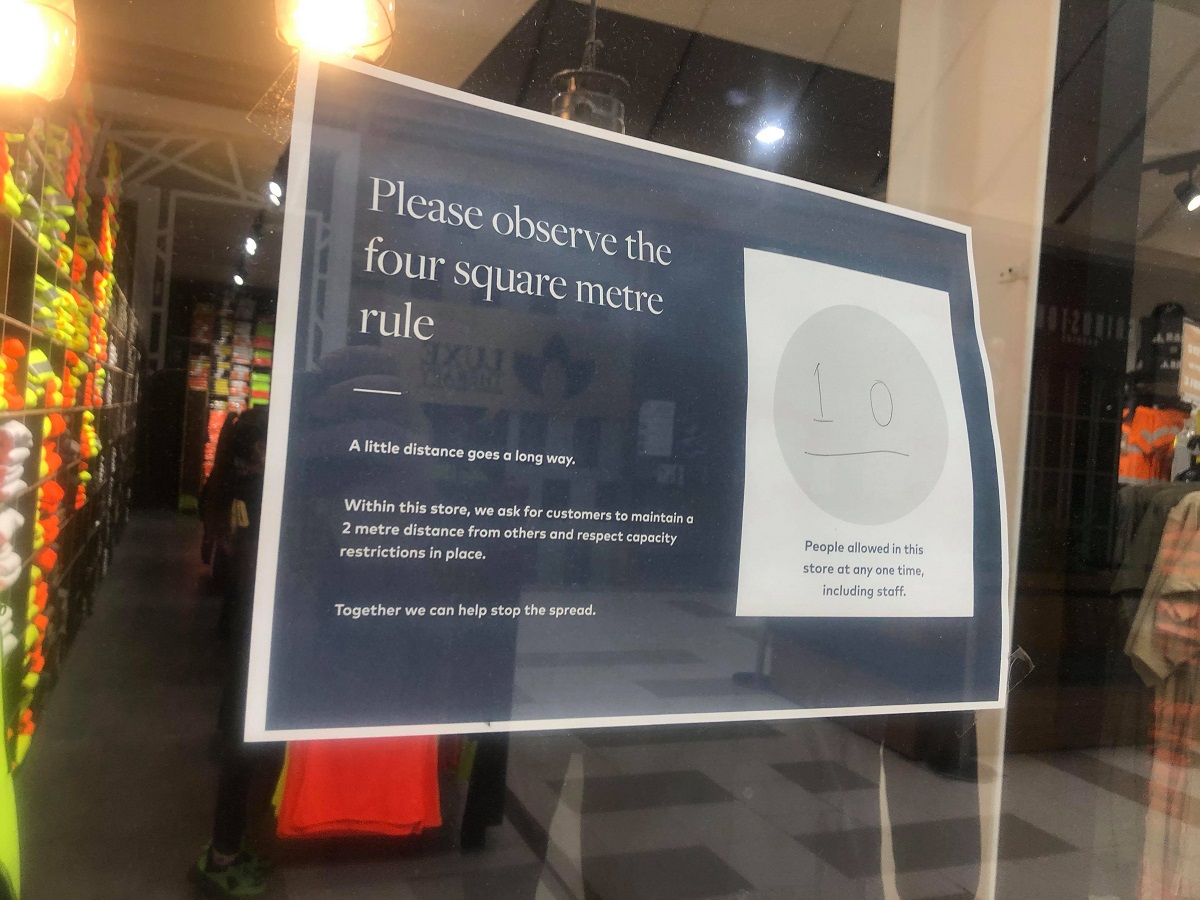 I had to look at a map to find out what is called as I’ve never been in there as it only seems to sell workwear, but they have a limit of only 10 people in the store at once, including staff and a reminder to keep 2 metres apart. 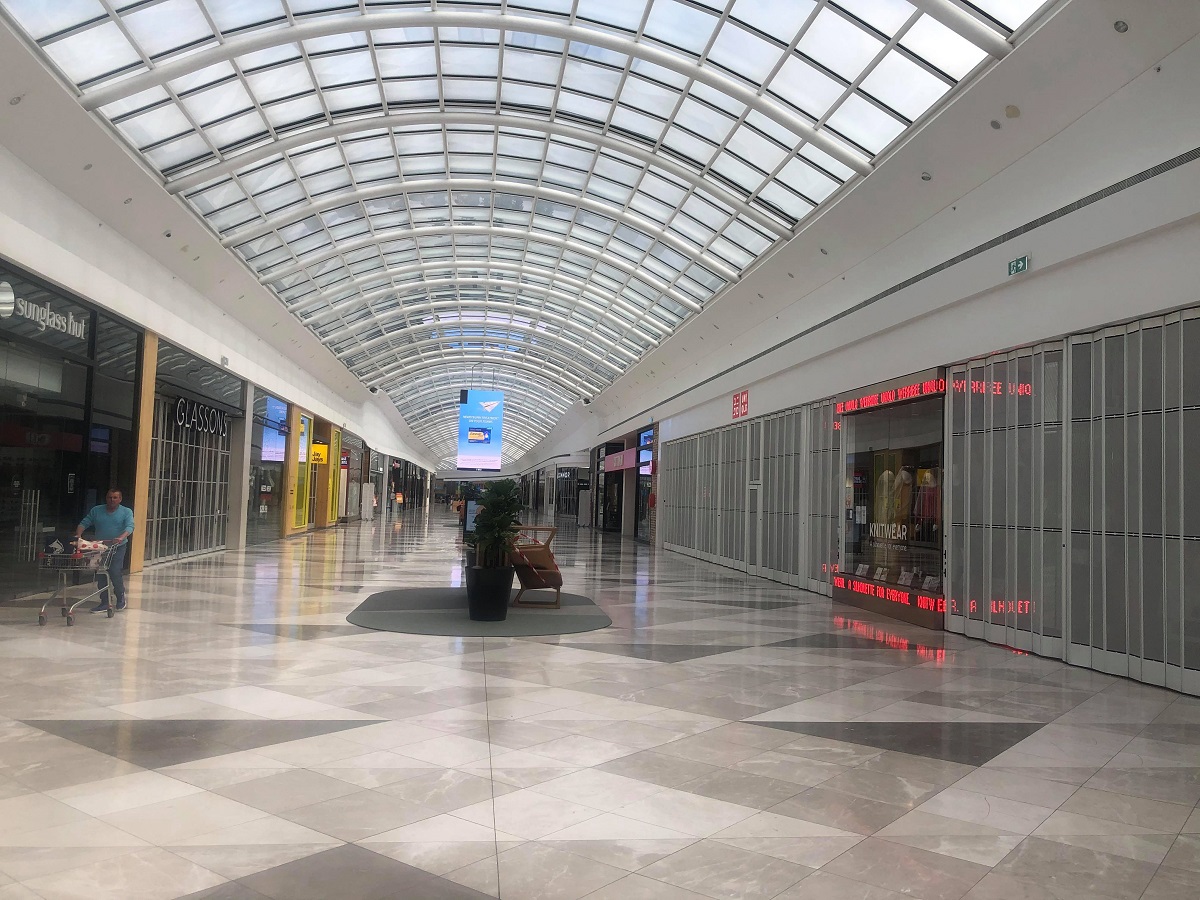 The wing with Uniqlo, Sunglass Hut, Glassons, Jay Jays etc appeared to have all shops closed. These are mostly clothing stores.

Here’s Sports Girl, Witchery, Dotti etc all closed and I think you can see Myer closed in the distance. I guess if you need clothes in Werribee, Target, Big W and Kmart are your main options. I think even Myer was closed, but I didn’t venture down quite far enough to be sure. 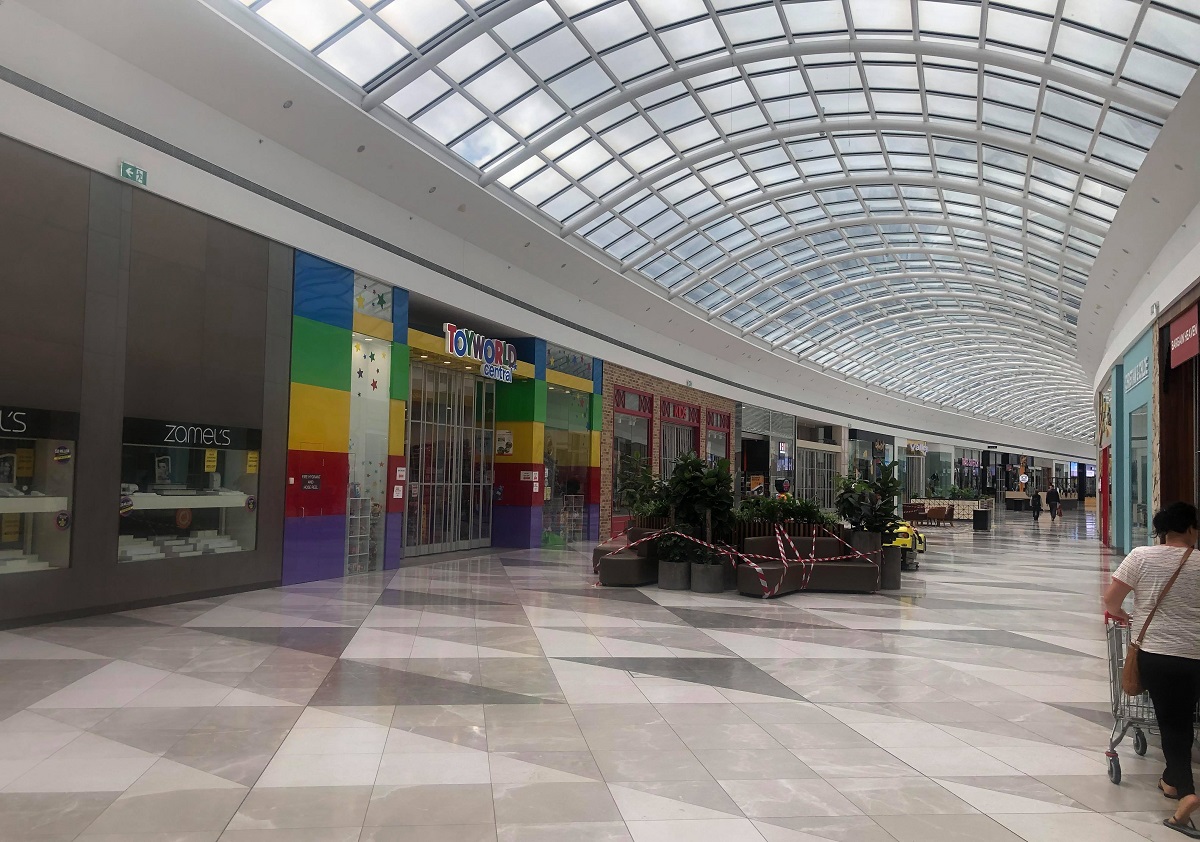 What’s odd is I thought I saw ToyWorld Central open when I walked back on my way out, maybe they were just closed for lunch. All the couches and seating areas around the plaza were closed off with tape. ToyWorld is the only good toy store since we lost the Pacific Werribee Toys R Us a few years ago. 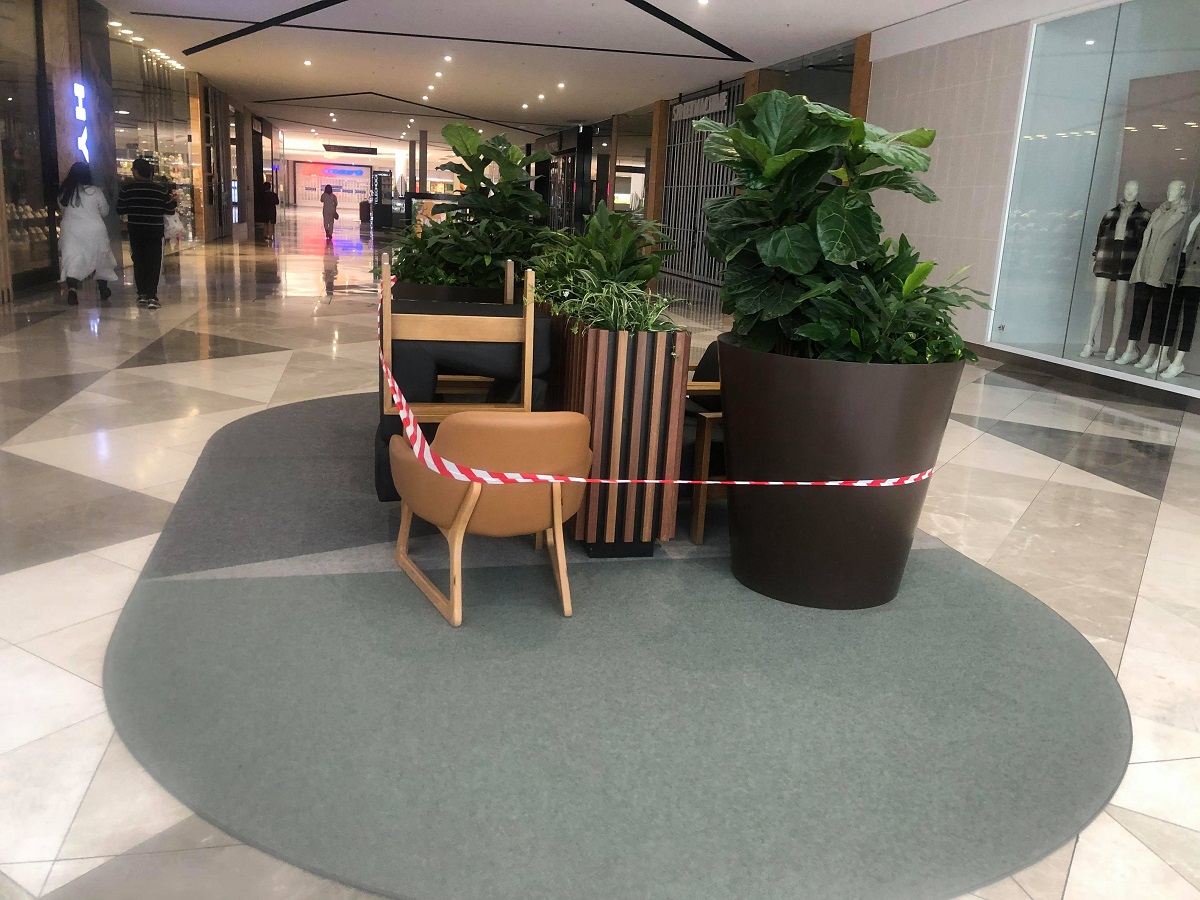 Here are more seats all wrapped up and off-limits. 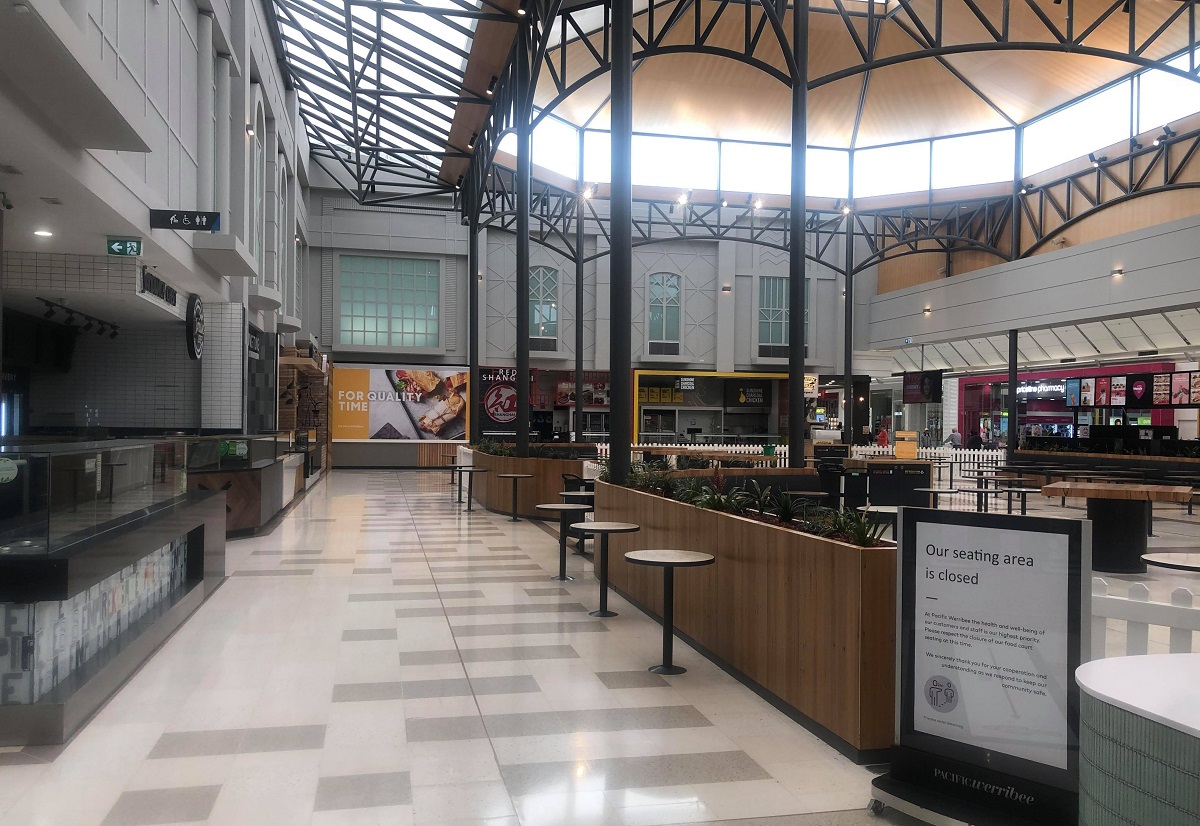 The older foot court was completely shut with the seating area closed. I didn’t check the larger food court at the other end, but I think it’s open for UberEats and other delivery services, as I think I’ve seen Lord of the Fries open on a delivery app. 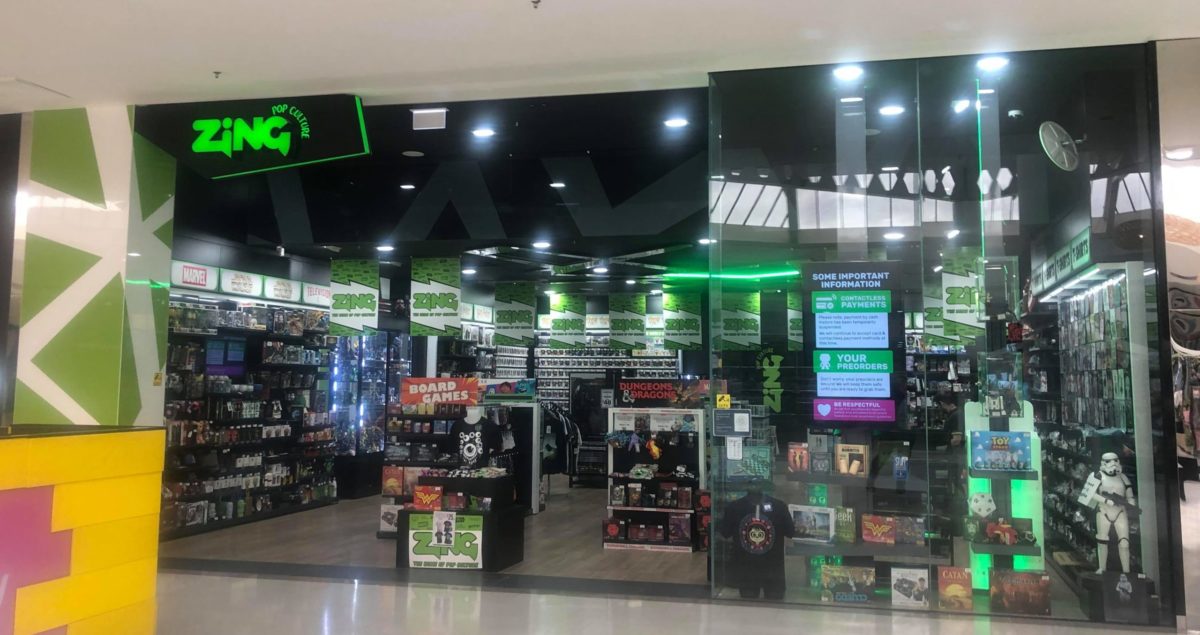 Zing was totally empty and so was EB Games, I was curious if those would remain open as I recall hearing their parent company in the US, Gamestop was trying really hard to remain open. These stores also had some kind of limits on how many people could be in the store and to keep a distance. Games World was open but had limits of 6 people in the store at once including staff. As well as a 2-metre warning and a sign that said: “Due to current circumstances for the safety of our staff and customers we can no longer accept cash payments. We apologise for any inconvenience”. 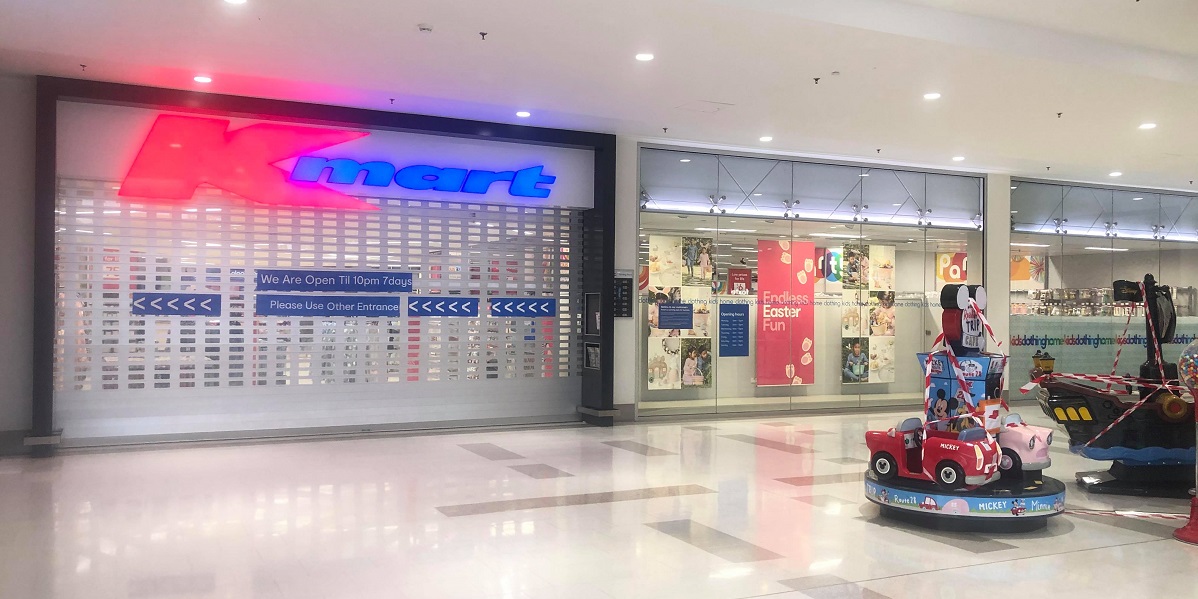 Kmart one of its entrances closed, perhaps to help control the number of people in the store at once. The hours are now only until 10 pm instead of 24/7 which hopefully allows time for cleaning. The children’s rides on the right are also covered up and banned from use. 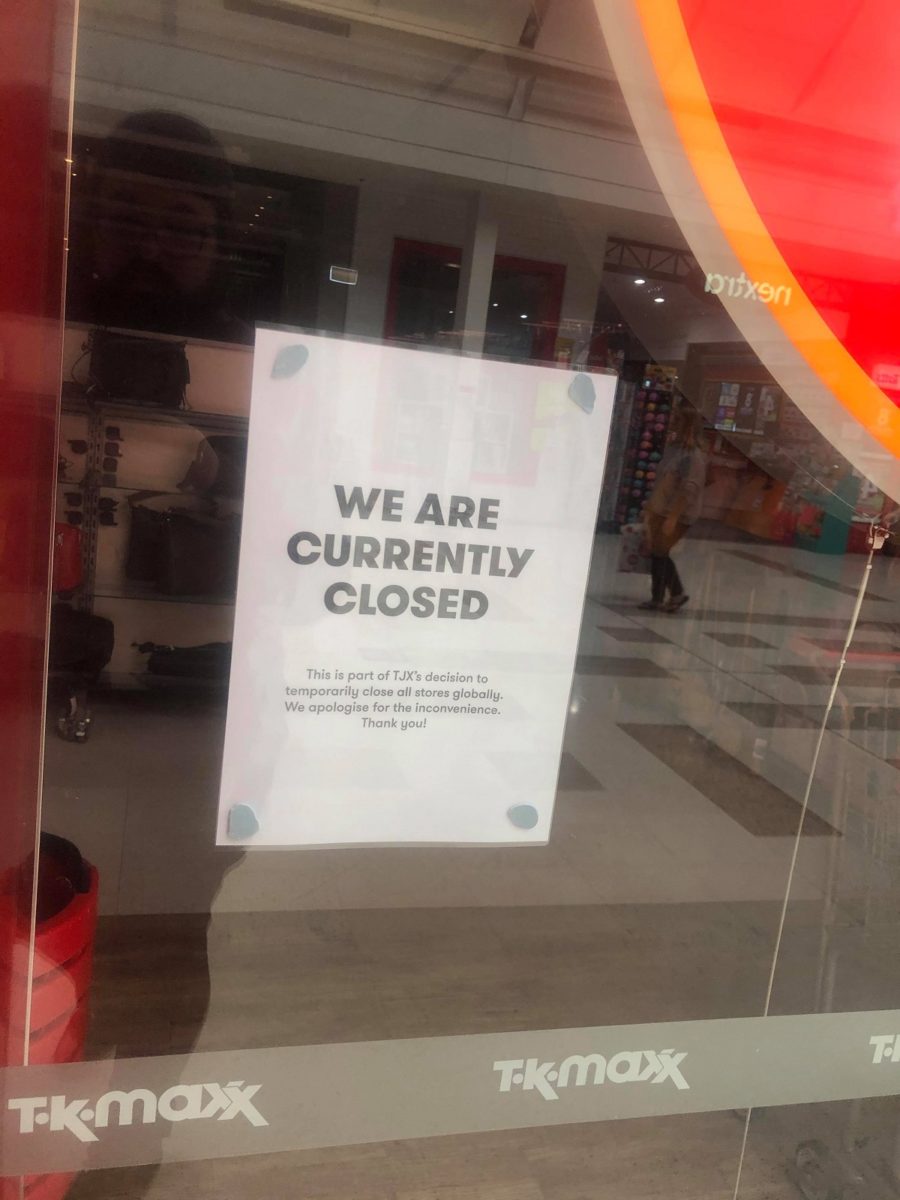 I was slightly surprised that TK Maxx was closed given it is one of the larger stores. Given it is mostly clothes and homewares though I guess it makes sense it was closed as the other stores that sell those things were also closed. Being part of a global organisation also means it might play by different rules to Australian businesses too. 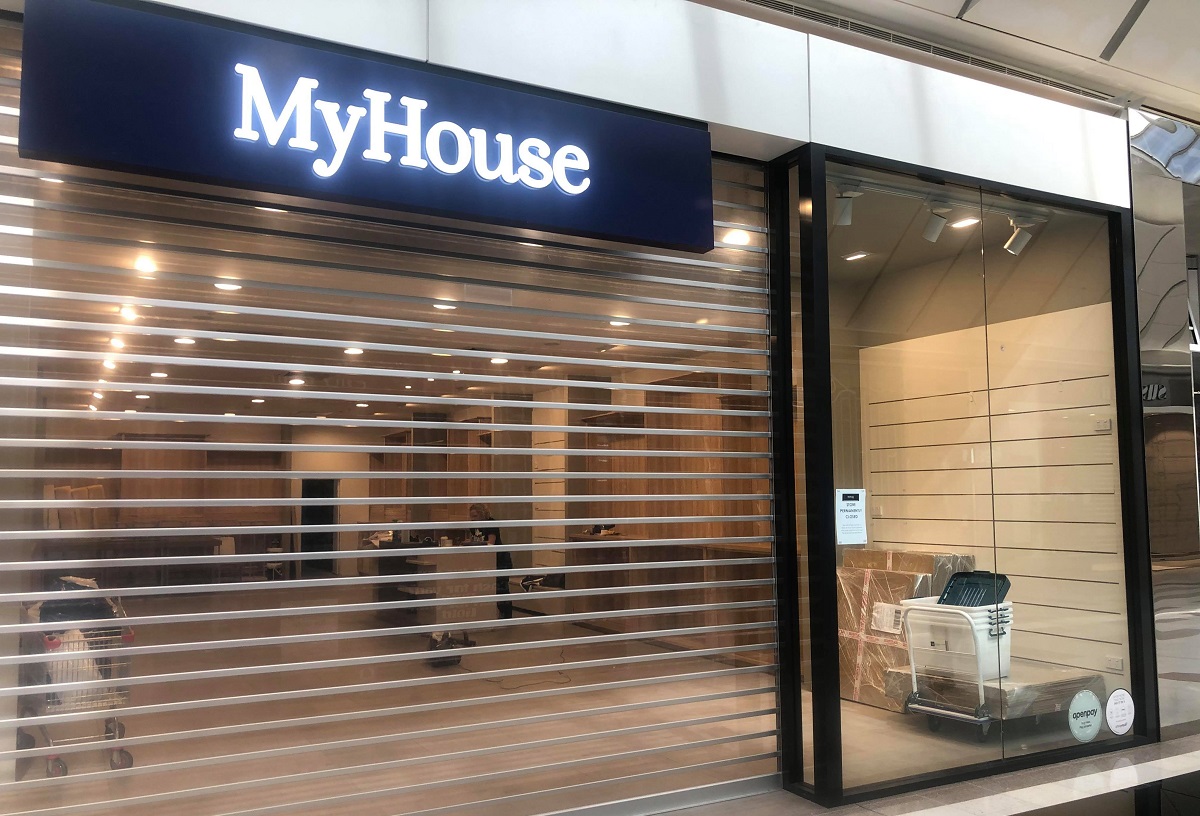 The only shop I noticed that was permanently closed was MyHouse. They had a nice sign up thanking their customers for the support over the years. 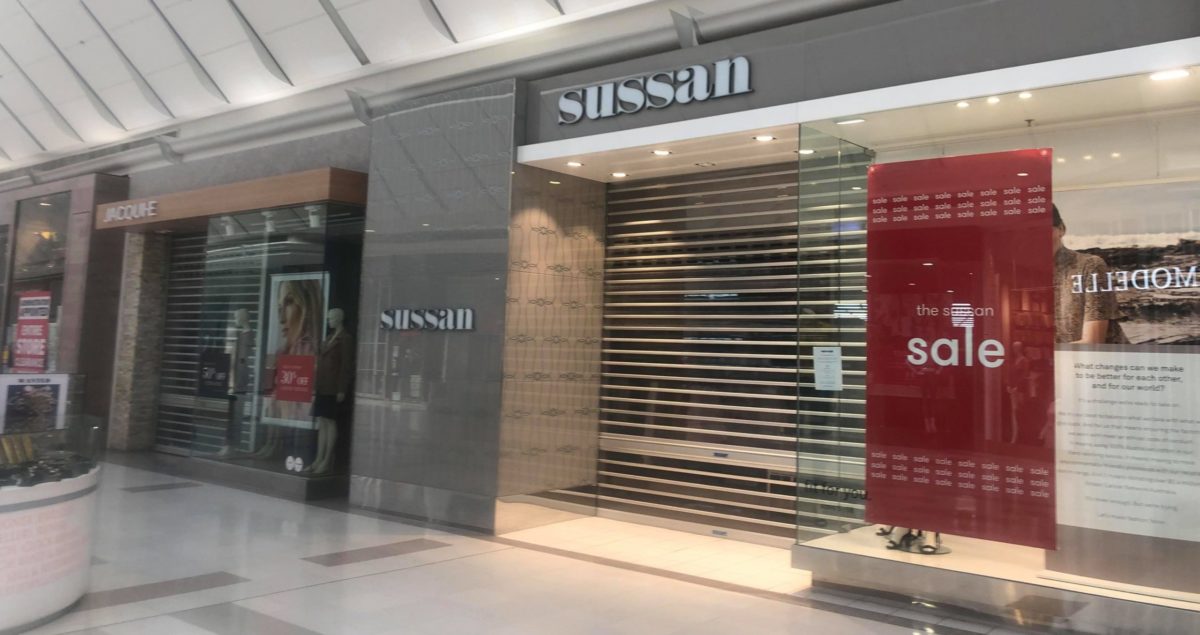 Rebel Sport had a designated entry and exit set up to help monitor how many people were in the store. This company rebranded to just “Rebel” in 2012 but I think most people still call it Rebel Sport. 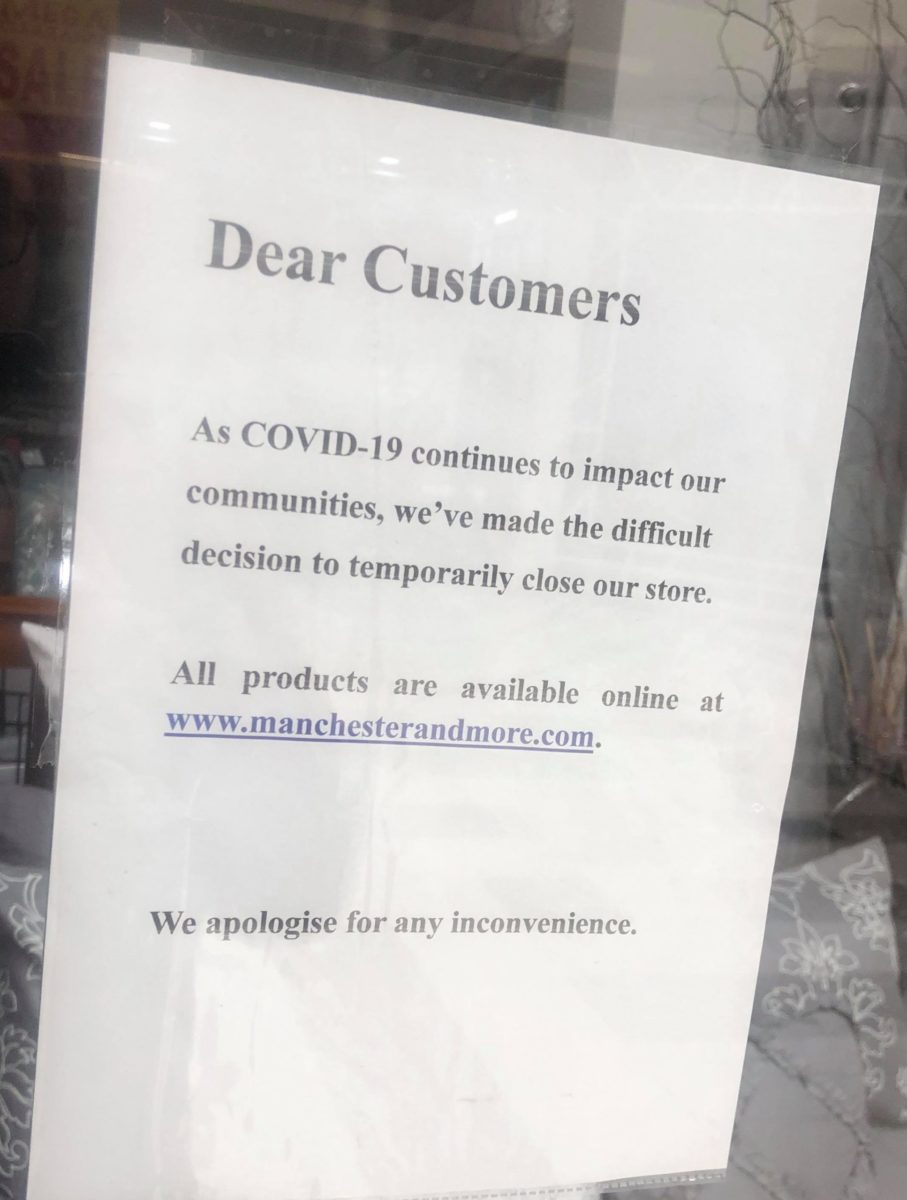 Manchester and More had this sign telling you to shop online as they are temporarily closed.

The jewellery stores were all closed as well, they also had all their stock removed, including Prouds as shown above. 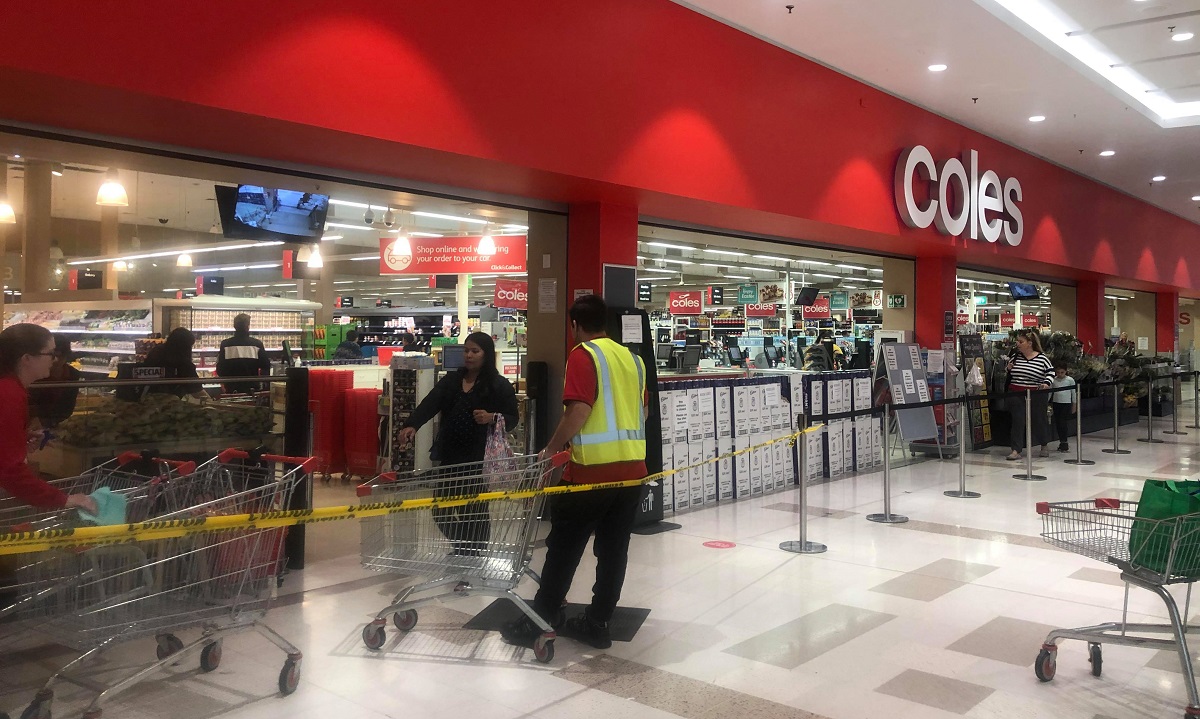 I didn’t go to Coles, but I saw they had preparations for a giant line to limit the number of shoppers in the store. This is probably most useful during peak times, such as in the morning when it first opens. It looked reasonably quiet today, granted it was around lunchtime on a Wednesday whilst most people are still at work or working from home. 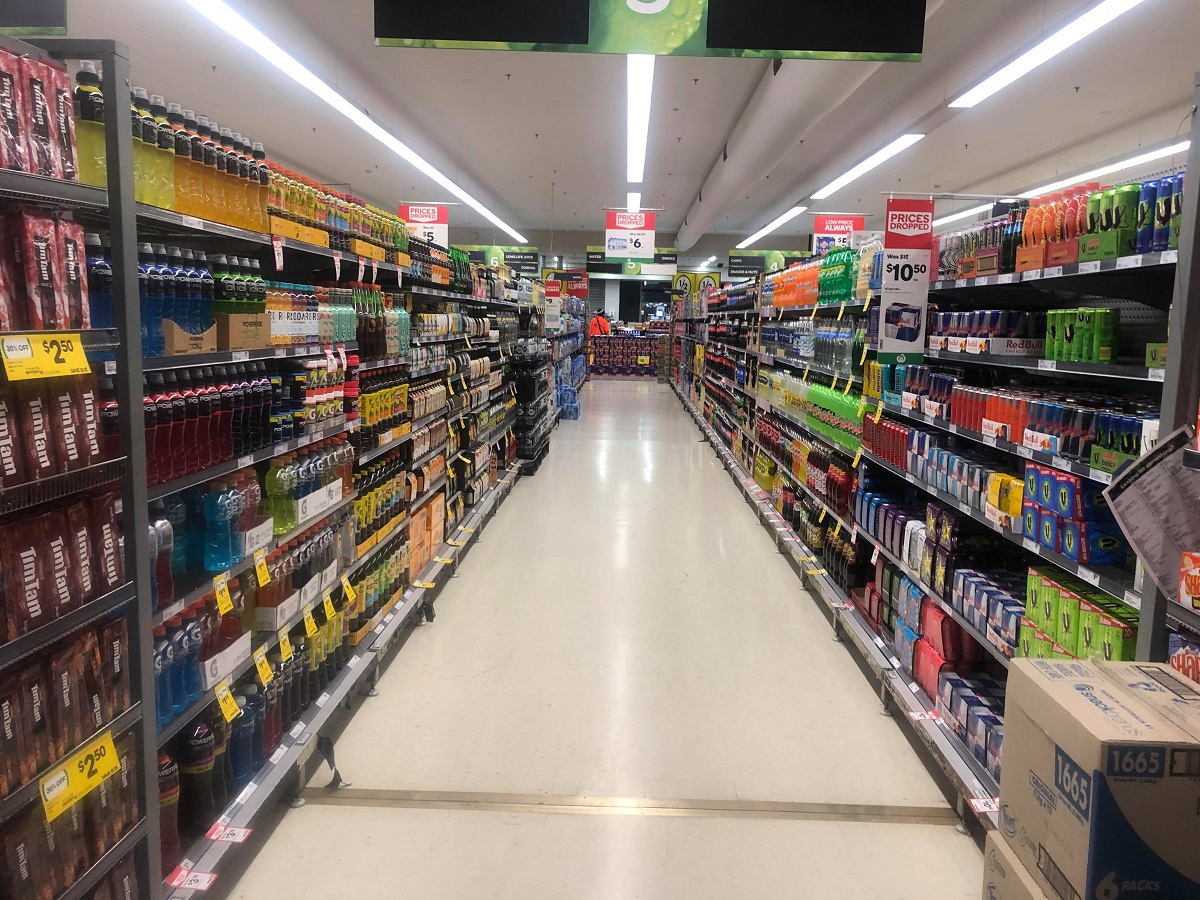 I only got one photo inside Woolworths as I was carrying a basket, but I found it interesting to see a fully stocked soft drink section. There were previous visits to supermarkets at the peak of everyone panic buying where nearly all the soft drink was gone. I did manage to get toilet paper here too.