The 1990s was a magical time when junk food was freely marketed to kids on TV and always welcome as a snack in a child’s lunchbox at school. I believe nowadays in Australia, junk food for morning tea and lunch is frowned upon. In fact, I think some schools don’t allow it at all, or at least in their canteens.

Attending primary school in Werribee, Victoria between 1994 and 2000 I’d typically have 2 junk food snacks for morning tea at recess, then a sandwich at lunch, or maybe a lunch order from the canteen once a week. This article is about the old-school Australian snacks I used to bring from home or snacks my friends would often have in the 1990s. The snacks available in the school canteen are a totally different story. Now sit back, relax and jump into my time-travelling lunchbox and travel back to the mid-late 90s (presented in no particular order)… Whilst it’s still possible to buy Bega Cheese Stringers, they still remind me of being a kid. I had some at my friend’s house in 2019 and found it kind of gross. I try not to handle my food too much, it seems like a weird way to trick kids into getting some calcium. Wagon Wheels are still available in 2020 but are now made by Arnott’s. These were made by putting marshmallows between two Marie biscuits and covering it in chocolate. 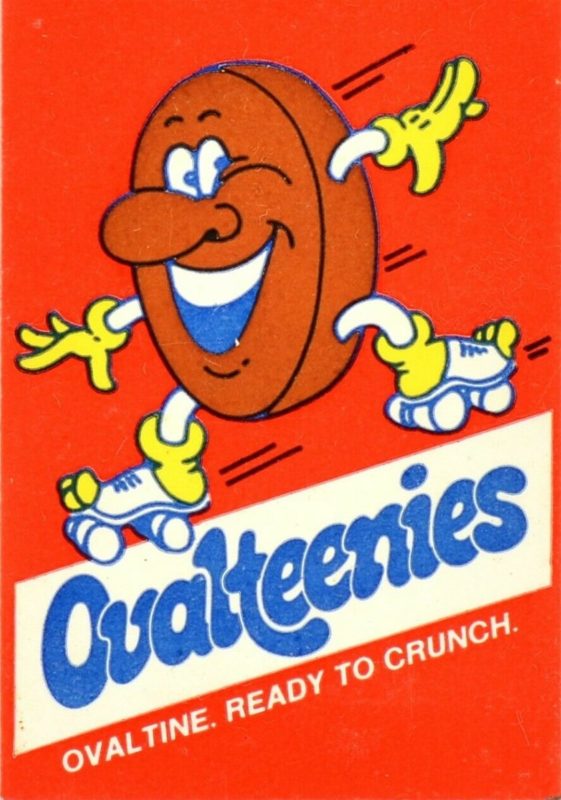 These are another item that’s still around today. Ovalteenies are a malt & chocolatey flavoured chewable tablet-like snack that is made from compacted Ovaltine, which is kind of similar to Milo. I never really notice Ovaltine at supermarkets anymore, but these Ovalteenies are definitely still around.

This picture is actually of a sticker I found on eBay and looks to be from the 80s or early 90s. The packaging today for Ovalteenies still seems similar to how I remember them as a kid. Fun fact – in the early 2000s, Ovalteenies were changed from circles to egg-shaped and have since returned to the original shape due to public backlash. 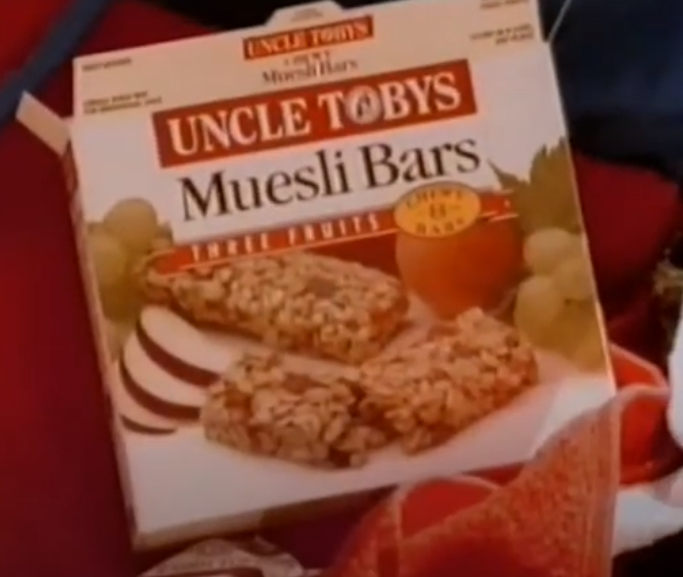 An absolute staple in my childhood lunchbox in the 90s, Uncle Tobys muesli bars. Whilst chewy chocolate was one of the most popular among other kids, I typically had fruit yoghurt top ones. Which were probably healthier, or at least pretending to be healthy. 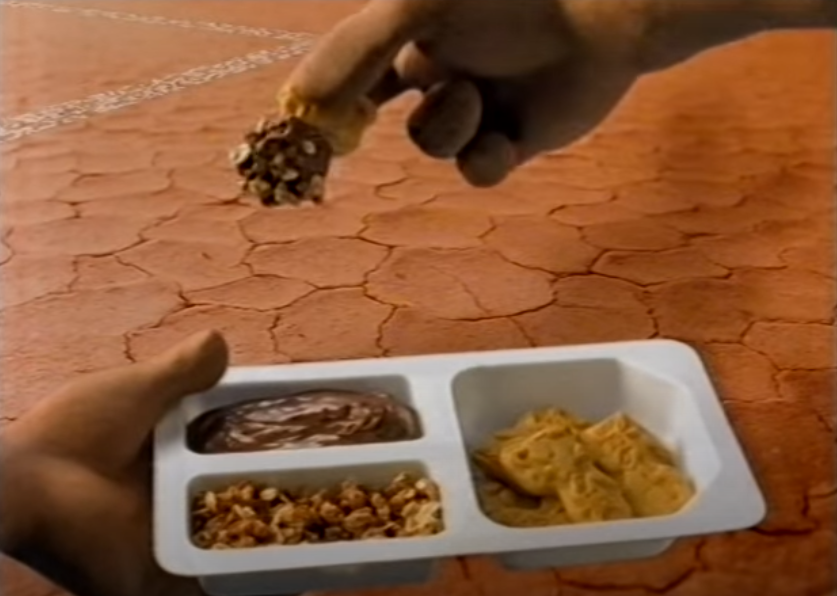 This is a confusing one, as originally Dunkaroos in the 1990s had 3 sections of the tub, you’d grab a kangaroo-shaped biscuit, dip it in the chocolate dip then into the third container of muesli crumbs. Today they are made by Nestlé in Australia and only contain biscuits and dip. Originally there were 4 flavours available, I believe they were choc-hazelnut, strawberry, vanilla and possibly honeycomb.

The Woolworths website only appears to have the choc-hazelnut flavour, but it’s a bit hard to tell as they incorrectly spell it as “Dunkeroos”. It seems typical that over the years, only the most popular flavours survive.

Why did they remove the muesli crumbs? I’m guessing it was due to the mess they could cause. I recall it being quite easy to accidentally flick the crumbs everywhere as the flat part between the biscuit container and the dips acted a bit like a spring if you applied too much pressure to one side. I suppose it was just easy for kids to spill them by other means as well. I believe the modern Dunkaroos might have the muesli crumbs baked into the kangaroo-shaped biscuit instead now, rather than being plain cookies. 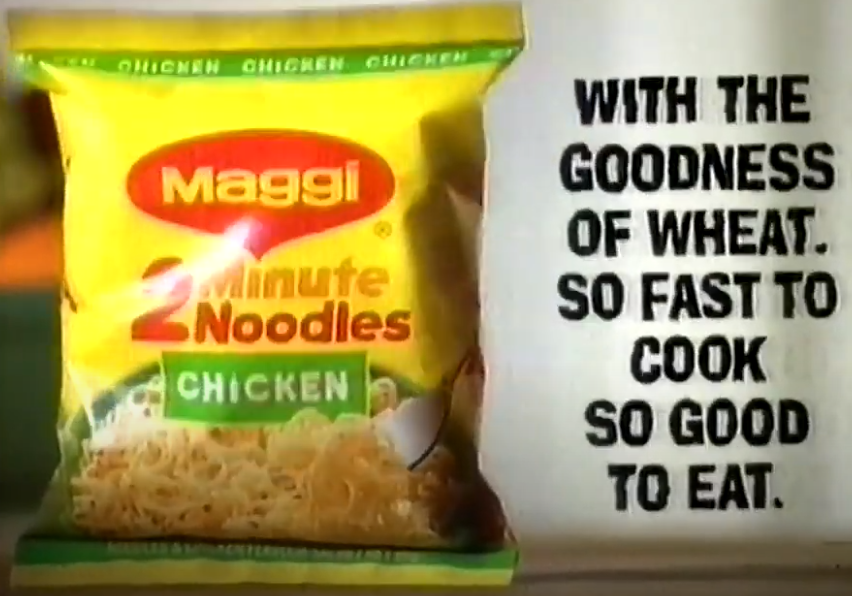 As a kid in the 90s, a packet of Maggie chicken noodles with its powder tipped inside the bag, crushed up and eaten like chips or even as a brick of noodles was far more common than actually cooking them. This was quite popular and probably continues on today. This is definitely a cheap snack for kids.

I’m not sure if this was a response to the trend of eating Maggi noodles dry without cooking it but the Mamee Monster Noodle Snacks actually market themselves as a noodle product to be eaten dry. It always seemed like a cheap knock-off of Maggi 2 Minute Noodles to me as a kid, but now that I think of it, both are incredibly cheap. I think I only had these once or twice ever, but many others look back on these fondly. You can still buy them today. 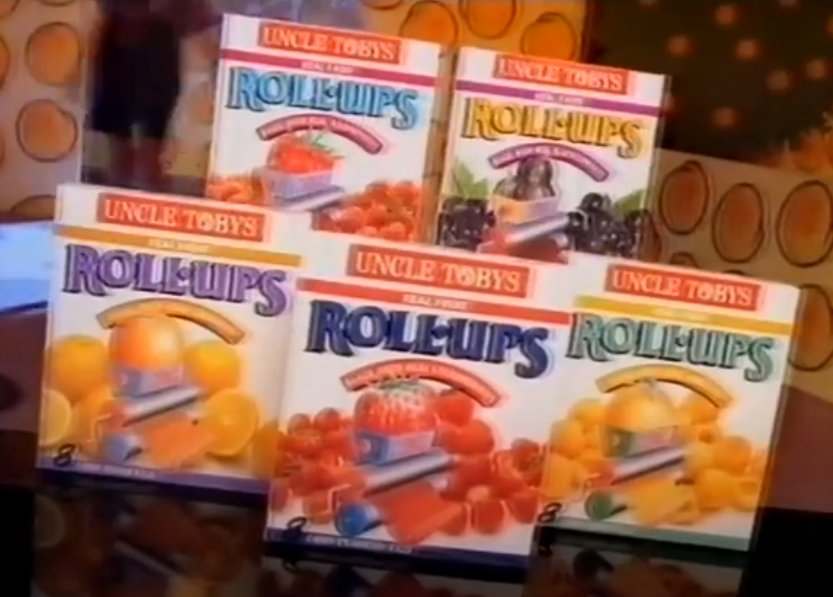 Uncle Tobys Fruit Roll-Ups were fun. It was like eating a sheet of flavoured plastic. There were a lot of promotional variations releases with popular cartoon characters printed onto them with a white outline. I imagine these were meant to sound healthy and without investigating the nutritional information, I highly doubt it. It was like candy. I doubt it even filled you up at all either. I think the version I remember was in a red box, this is probably an old American product. Space Food Sticks were these sticks that looked a bit like a Kit-Kat bar but were bendy, unlike chocolate. I’d love to try one of these again. They always seemed healthy if astronauts were eating them. 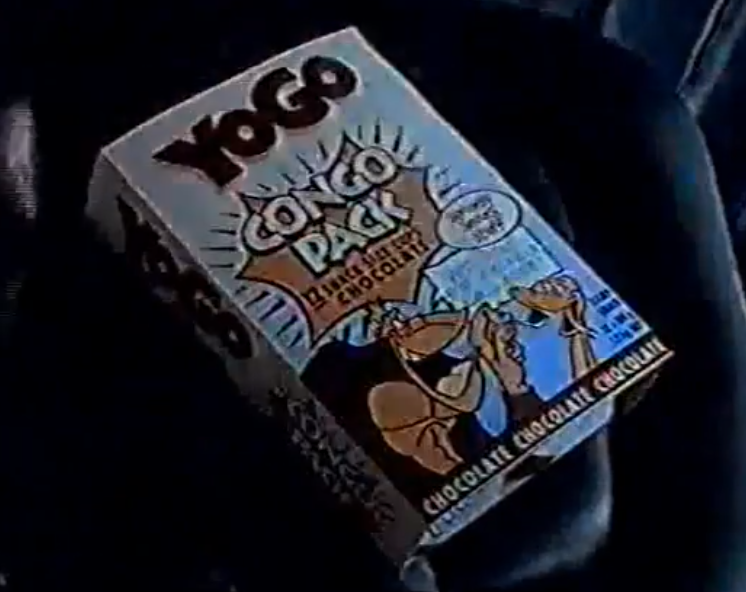 I wouldn’t say that Yogo was the best chocolate yoghurt or pudding type product, but it definitely had the best TV commercials featuring a stop-motion gorilla and snake. These always tasted kind of plastic-like and slimy to me, but I’d sure as heck eat them instead of something healthier. 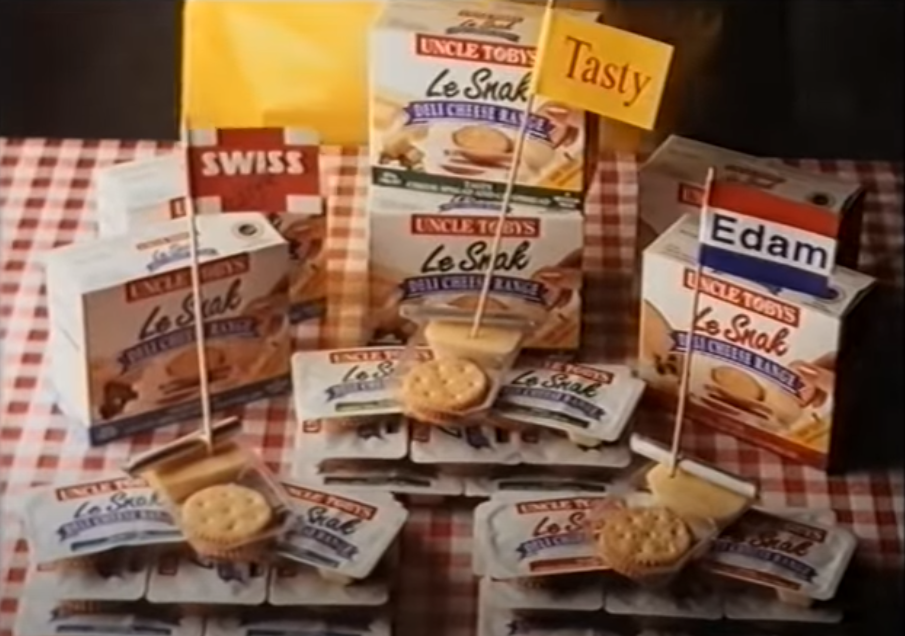 The ads for Uncle Tobys Le Snack sure made me think these were fancy and french as a kid. 3 biscuits with a different flavoured cheese dip was a great snack and I’ll still buy these and demolish half a box as a snack at work sometimes. The flavour selection seems to have changed over the years, but these would surely remain a popular lunchbox snack for kids today. Similar to a LeSnack or modern Dunkaroo, Kraft had their own cracker dipping series of Snackabouts, which included either Kraft Vegemite or a Kraft cheese spread that you could dip the crackers into. These don’t appear to be available anymore. 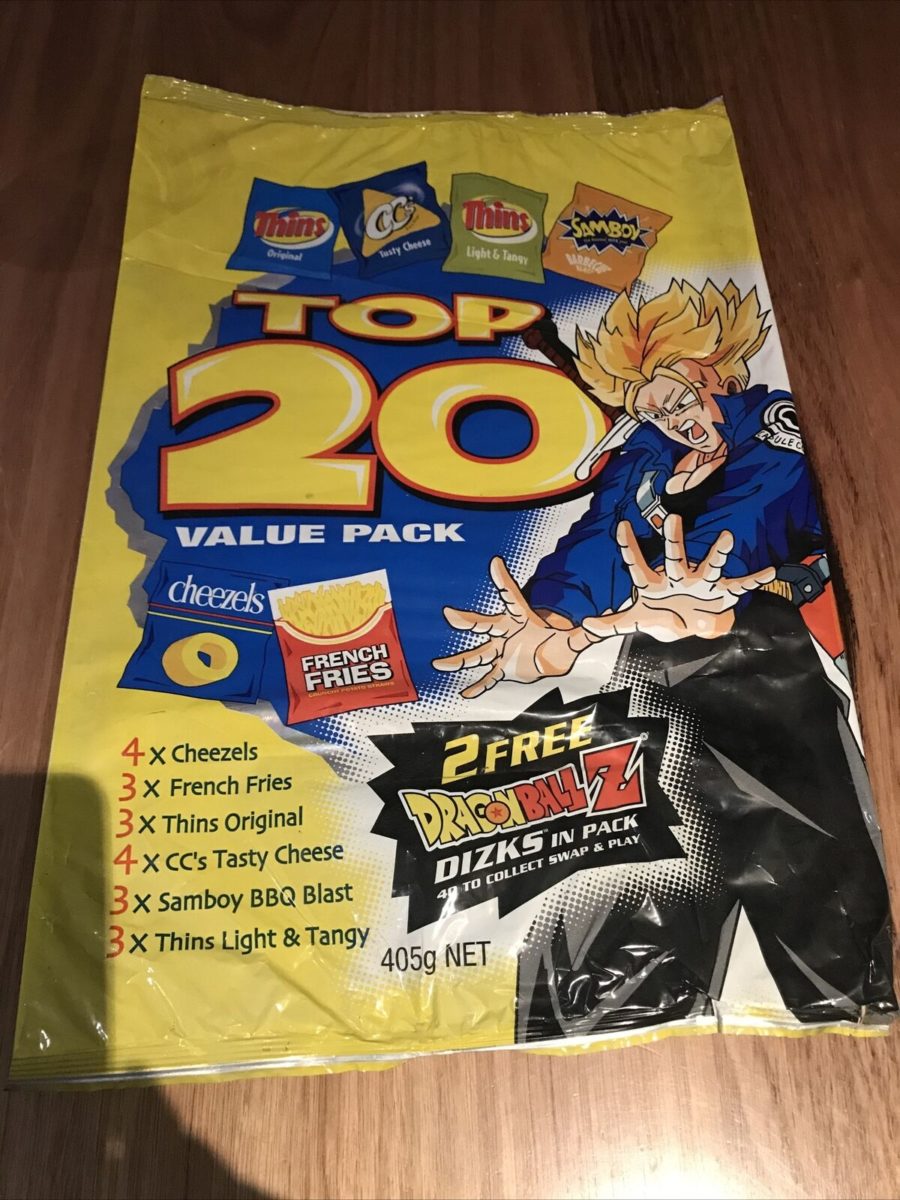 Giant bags of up to  20 little packets of potato chips (or crisps or whatever you want to call them) were also a staple of almost every morning tea for me in the 1990s and probably all the way through high school in the early 2000s as well. This could include various brands including Smiths, Lays, Thins, Ruffles, Samboy, Doritos, Cheezels, Tasty Toobs, French Fries, Twisties and more. It’s really too hard to find individual photos of these old multipacks so they can all be grouped together for now. These were also a way to get Tazos or Dragon Ball Z Dizks and other promotional collectables. 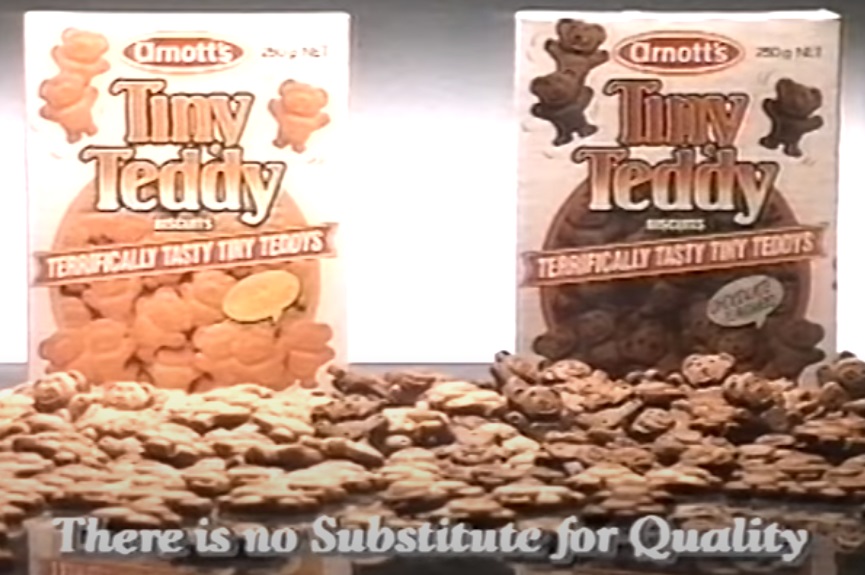 Tiny Teddy biscuits, or “Tiny Teddies” as I always called them are still around today. Whilst a box is pictured here, kids take them in little kid-size bags. There’s nothing more satisfying than biting the arms, legs and ears off of a Tiny Teddy before then eating the head and finally the body. 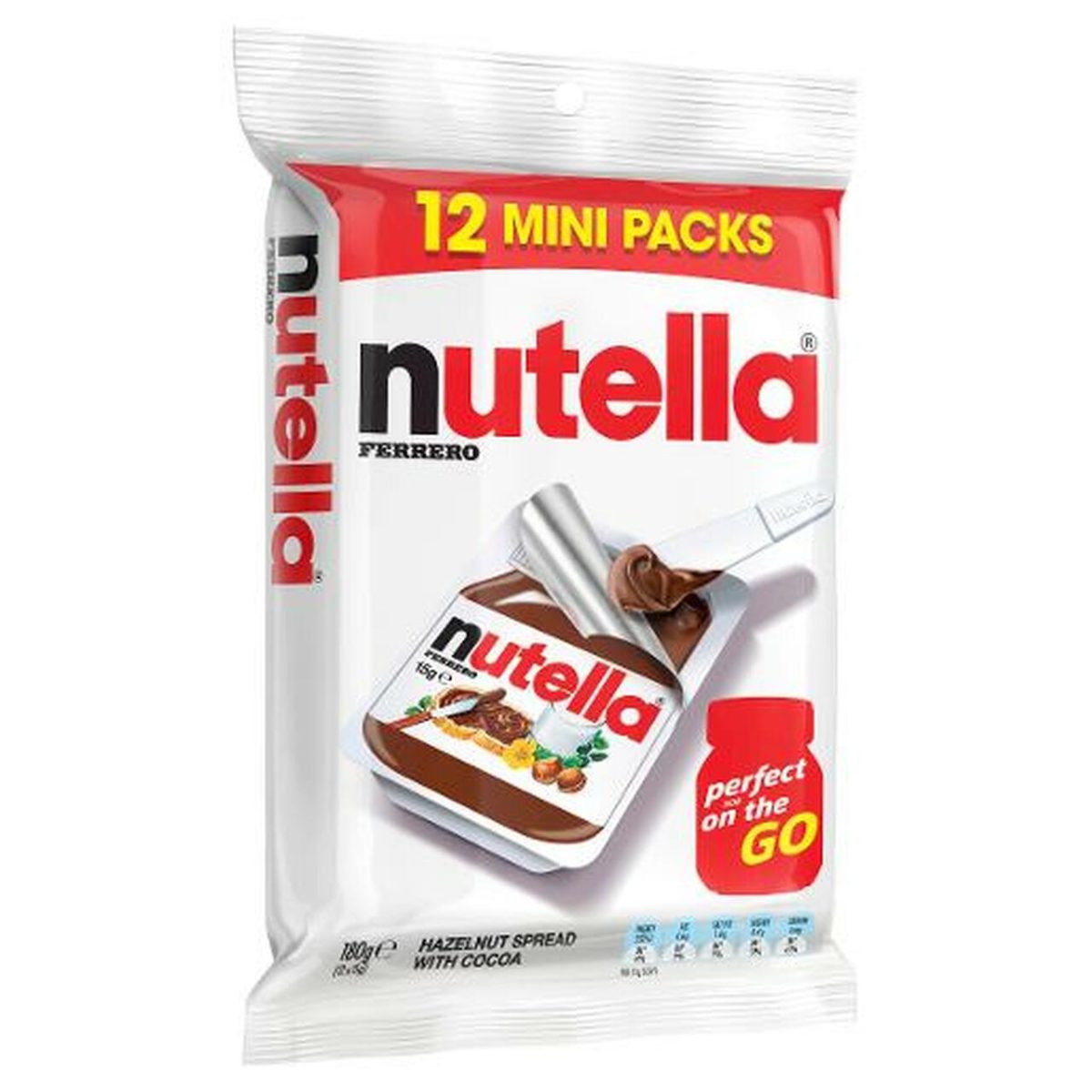 Little white containers with little white spoon/knife spreading sticks full of Nutella. Very basic and simple and were probably designed to be used on Airplanes or in Hotels but somehow became a snack food. I’m pretty sure our school canteen also sold these. Whilst Uncle Tobys already had the market for plastic-like fruit-like lunch box snacks corned, they also created this electrical-tape looking snack. Fruity Metres were 1-metre coils of Roll-Ups-like product that I believe had a layer of baking paper between the layers so that they didn’t stick together, kind of like the backing to double-sided tape. These must have been a lot of fun if your dad was an electrician. 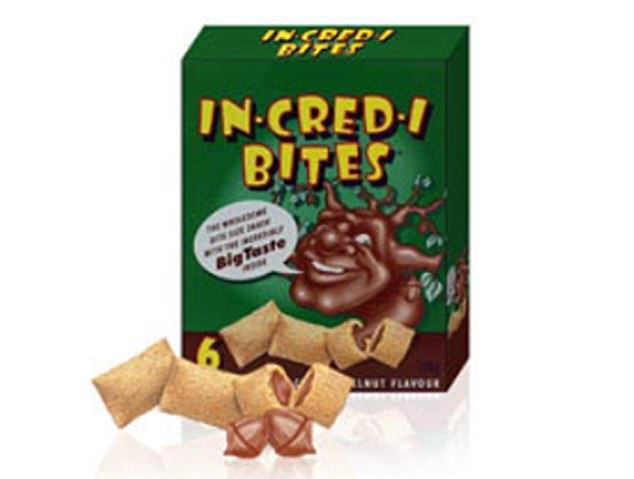 These were great but the spelling was so confusing I guess they didn’t last into the digital age. They had a crispy shell with a Nutella-like centre. They were available in a few flavours with different characters on the box. I believe the Strawberry had a giant pair of lips and there were also Vanilla In-Cred-I-Bites. I can’t find pictures of the other flavours anywhere. Just this Chocolate or Hazelnut one, which was by far the most popular. 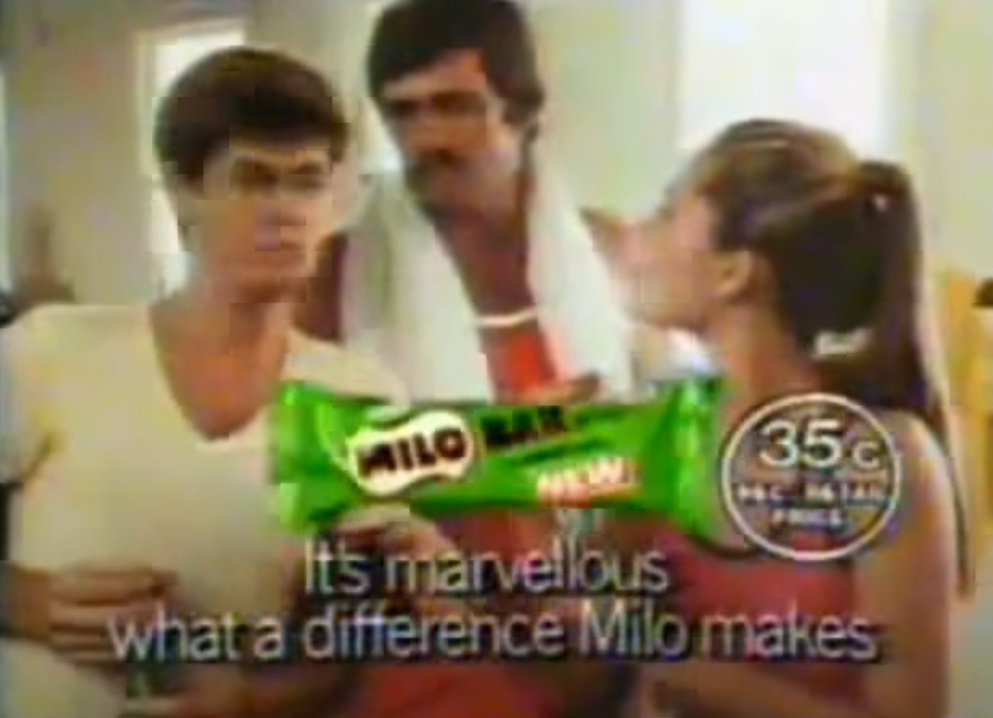 Excuse the potato-quality image above, but these were almost like eating a chocolate bar, but with slightly less guilt. They were bars of Milo cereal with the bases dipped in white chocolate. They were pretty good and you can still buy these today. According to the Woolworths website, the ones that are dipped in white chocolate are only 3/5 in the Health Star rating, whilst the ones without it are 4/5. I certainly always had the least healthy option. 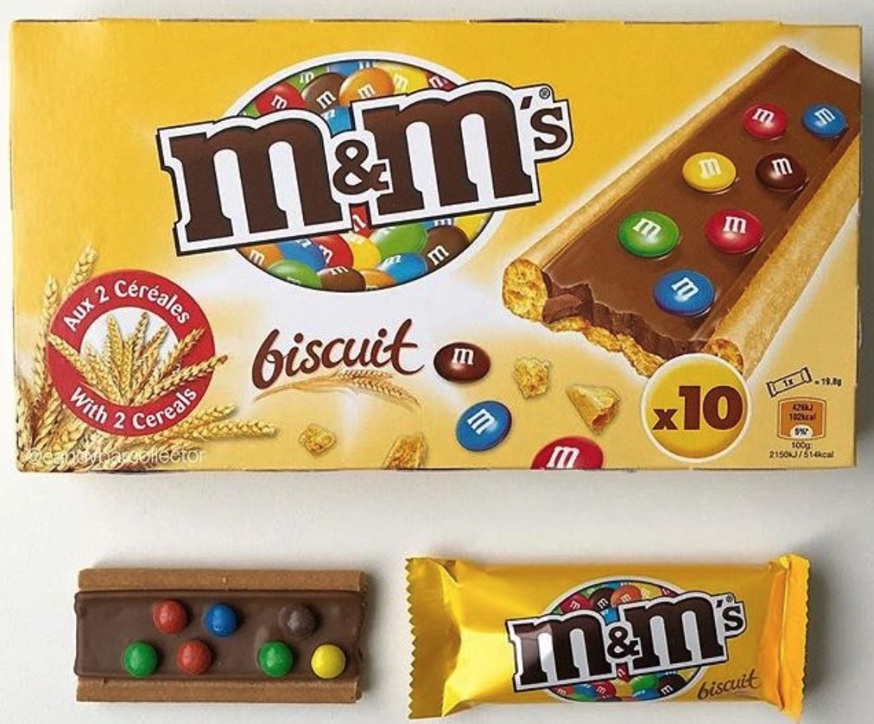 I think this image might be from overseas but the ones we had looked pretty similar to this. I don’t know if I’ve just grown a lot, but I feel like these used to be bigger. These were quite good. It mentions that it’s made with “2 cereals”, but I don’t think anyone eating these were kidding themselves that these are healthy. 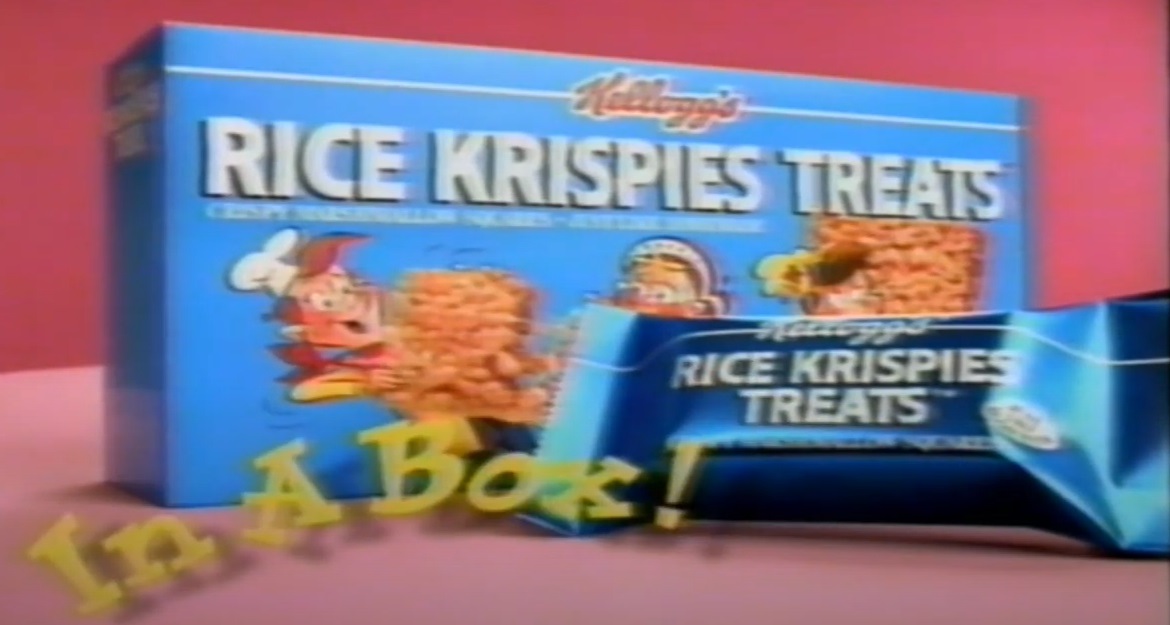 I totally forgot about Kellogg’s Rice Krispies Treats. I assume these came about due to people making this marshmallow and Rice Bubble recipe as a party or bake sale snack and Kellogg’s realising they could package this and sell it themselves for presumably more than the price of a box of Kellogg’s Rice Bubbles. This is why the TV commercial makes a big deal about these coming in a box. 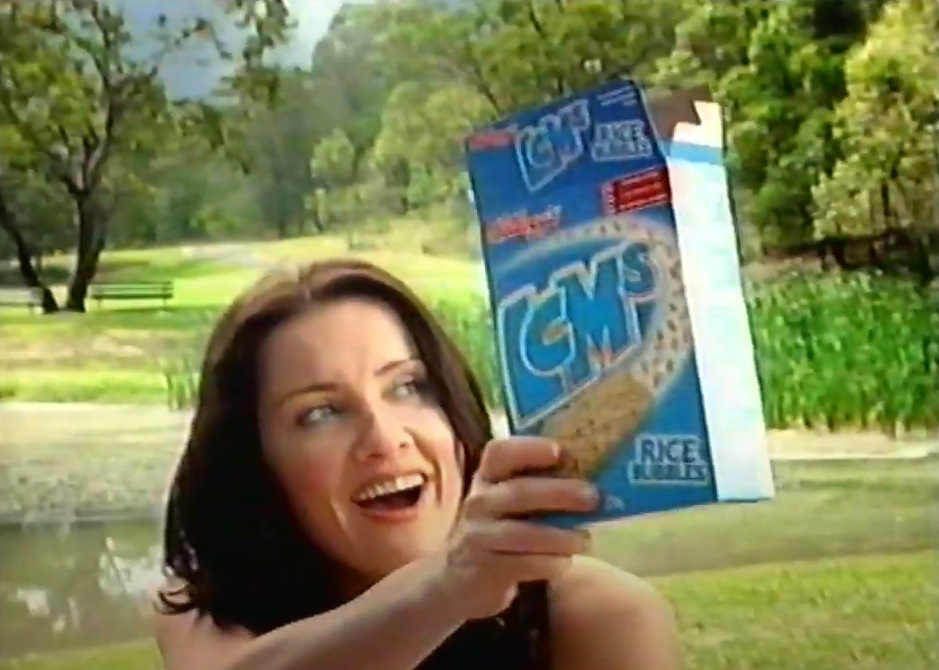 Kellogg’s LCM Bars totally superseded the Kellogg’s Rice Krispies Treats. They were basically the same thing, but with multiple flavours and extra chocolate pieces and whatnot. What does LCM stand for? According to the Kellogg’s website, it doesn’t stand for anything, it just sounded cool at the time.

“We’ve heard it could be Little Crunchy Munchies or Light Crispy Morsels. The truth is it doesn’t actually stand for anything at all. We wanted to find a name that was catchy and a bit different and LCMs seemed to hit the mark.” I think this packaging is quite modern, but the concept of having little boxes with cheese, ham and crackers is something I very rarely had as a kid, as they were quite expensive. This Munchables pack comes with M&Ms Minis as a dessert. I like to think that kids eating these get dared to eat all 4 ingredients at once. 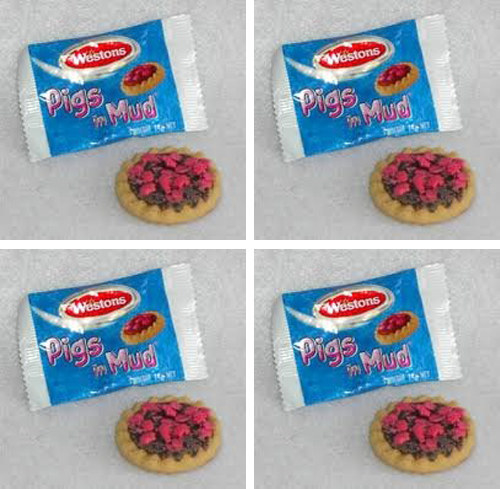 These were a plain biscuit with a chocolate fondant as the “mud” with little pink candy pigs sprinkled on top. These weren’t particularly amazing to eat, but dang were they cute. Images of Pigs in Mud biscuits are incredibly hard to find on the internet everyone is just using this same image, so I don’t even know who to credit for it. Dany chocolate yogurts were far better than Yogo. It was less plastic and more like mousse, but without the air bubbles? It’s hard to recall. I believe this brand also made variations that came with little plastic bags of sprinkles on top during the 1990s. After they stopped doing that, I used to add sprinkles to my own Danone Dany yogurts at home to replicate it. I used to have these for breakfast, but if I took it to school I’d have to take a spoon. 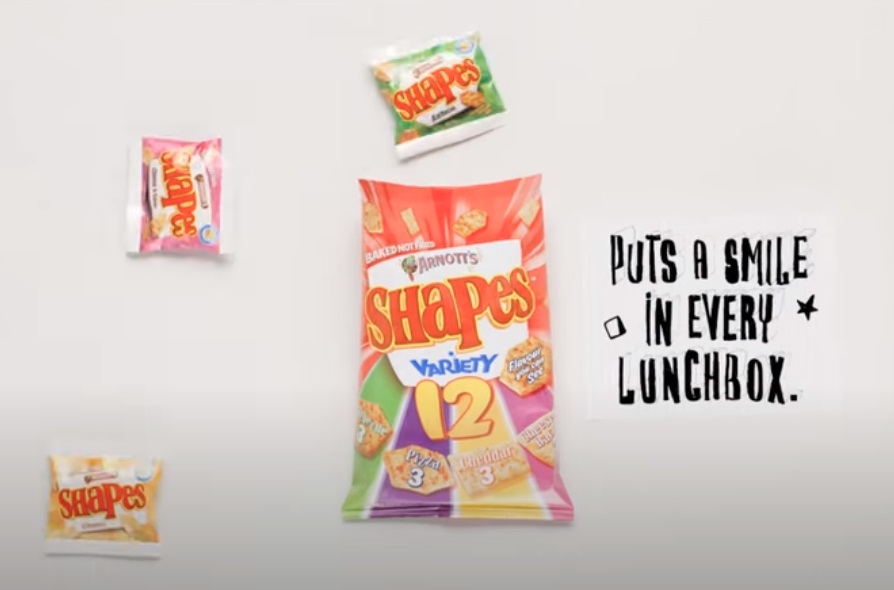 These multipacks of kid-sized savoury biscuits were great and are still great today. We’d always eat the Cheddar and Cheese & Bacon ones first, then Pizza Shapes, then finally Barbeque Shapes were always the leftover ones at the end of the packet. For some reason, Barbeque Shapes are the most iconic flavour, but the others are all better. I believe in the 1990s there was also a miniature version of the Chicken Crimpy Shapes as well, but perhaps that’s just wishful thinking.

How many of these old-school kids snacks did you try in the 1990s? Did I miss anything important?